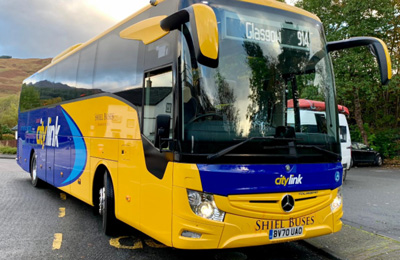 Based in Fort William, family-owned Shiel Buses has taken a new Mercedes-Benz Tourismo. The company has more than 40 years of experience and operates school and service contracts as well tours in the West Lochaber area and beyond. Most of its fleet of 48 vehicles is PSVAR-compliant.

David MacGillivray, director, Sheil Buses, says: “The driver and passenger feedback on the Tourismo has been really positive since we bought two in 2018.

Both Tourismos were purchased initially for our Citylink contract, which runs from Skye and Fort William in the Scottish Highlands to Glasgow.

“This high mileage and arduous route has highlighted a fantastic return on fuel economy, vehicle handling and reliability. The vehicle build quality coupled with the new safety features on the new Tourismo Coach, such as the front collision guard, enhances the vehicle perfectly.”

The new Tourismo ordered by Shiel Buses has been supplied by Mercedes-Benz Coach Sales at EvoBus (UK).