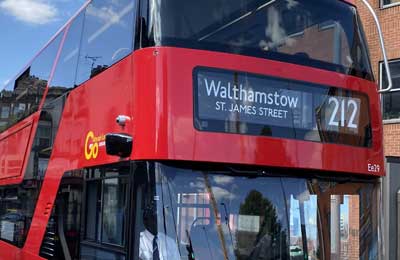 21st Century Technology has supplied and installed the SmartVision system on more than 100 vehicles at five Go Ahead depots, including 62 as part of a continuous innovation programme at Northumberland Park as electric vehicles replace diesel.

The SmartVision Camera Monitoring System improves the driver’s view, using high-definition cameras instead of mirrors to help reduce incidents and accidents, and lowers the lifetime running costs of the vehicle. It not only removes blind spots but also reduces the collision risk between mirrors and road users, street furniture and trees.

“I have been impressed with version 2 of SmartVision, which provides drivers with a digital overlay to give them context as to the position of the bus through the enhanced view in the monitors on both sides,” says Richard Harrington, engineering director, Go Ahead London.

SmartVision provides the driver with enhanced views compared to standard wing mirrors, according to 21st Century Technology. Cameras adjust automatically to maintain image quality in all lighting conditions, removing glare from the sun during the day and from headlights at night.

SmartVision was developed in readiness for TfL’s Vision Zero action plan, which aims to remove all deaths and serious injuries from London’s network by 2041.