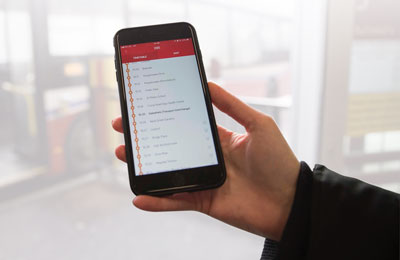 When passengers are waiting at a bus stop they do not spend their time staring at the travel pass they have just fished out of their purse or wallet. Odds are that they look at their smartphone instead, says Ashley Murdoch, founder and chief executive officer of mobile ticketing provider Corethree.

“For passenger transport companies, mobile data technology with m-ticketing capability is becoming the default choice due to convenience, speed and the ability to improve and personalise the customer experience through this direct communications channel,” he contends.

There is no denying that our lives increasingly centre around smartphones, and in more ways than one. Apps are playing a key role when it comes to proving entitlement to travel, and enabling passengers to see when the bus they want to catch will arrive.

While some stops in urban areas host countdown displays that show how much longer the bus will be, many do not, and those in rural districts seldom do. Apps that let travellers know when their bus is likely to appear also enable them to stay at home until the last moment, minimising the amount of time they have to spend standing at a stop in the wind and rain.

Travellers in Bolton and the surrounding area who ride on Vision Bus’s services are able to use an app for both Android and iOS smartphones courtesy of Rise Digital Media. The app delivers arrival times and service updates and allows them to buy and activate m-tickets.

Switching to the other end of the country, Rise has provided Byfleet, Surrey-based Falcon Coach Hire with a suite of packages including a new website, mobile app, bus tracking and journey planning. Although it is best-known as a coach company, Falcon operates bus routes in and around Guildford, Woking, Chobham and Surbiton.

What it refers to as its flagship, its 461 service, links Kingston-on-Thames with Addlestone. The launch of this service coincided with the website and e-commerce platform becoming fully operational.

Falcon’s decision to partner with Rise has turned out to be the right one, says Falcon managing director Richard Telling. “We’ve now moved all our online marketing onto their platform,” he says.

Rowgate Group makes use of what Rise has to offer too. It runs over 40 buses and coaches across two locations in Berkshire – Windsor and Bracknell – under the White Bus and Fernhill banners.

Rise is also providing digital services, including bus tracking, to Rotala’s Diamond and Hallmark operations in the West Midlands, the north west, and the south east. Rotala runs the Hotel Hoppa service which transports passengers from the hotels surrounding Heathrow Airport to the terminals.

Other bus tracking providers include Rygo.  Formerly known as Find My Bus, it can track a bus, tell passengers if it is running behind schedule and provide them with immediate alerts if a service has to change suddenly due to unexpected circumstances – flooding, for example. It can offer a route map showing the roads the bus is scheduled to travel down, and display simplified timetables designed to fit onto smartphone and tablet screens.

Last year it announced an upgrade to the support it provides to the Intalink Partnership.

Operated by Hertfordshire County Council, Intalink is responsible for managing partner arrangements between public transport services delivered by companies such as Metroline and Stagecoach and local authorities around the county such as Watford borough council and Three Rivers district council. Rail companies are involved too.

The upgrade allows customers to select the operator they want to travel with on their smartphone screen, check when the bus they want to board is expected to arrive using real-time GPS data, and buy an m-ticket in one transaction through the app. The availability of a cashless means of payment means they no longer need to carry the correct change or top-up payment cards.

Nor do they have to worry about losing travel passes. In this context, it is worth noting that Corethree has been involved with a project which enables travellers to tap their smartphones onto Ticketer readers to validate their ITSO travel products, instead of using a physical ITSO smartcard.

From an operator’s viewpoint reducing the amount of cash taken means reducing the cost of sorting and counting notes and coins and banking them. Furthermore, the m-ticketing app reduces the risk of fraud and loss of revenue, Corethree points out, and its use speeds up boarding.

“Other examples of the ways in which we have integrated live data with m-ticketing include the First Bus app, which uses real-time information to let users know when their next bus is arriving,” says Murdoch. “Our Translink mLink app enables users across Northern Ireland to access Translink’s timetables and its Twitter feed for travel updates on the move.”

As well as meeting the needs of major companies, Corethree wants to help small- to medium-size fleets. That is why it has launched Coretickets, an m-ticketing app which it says can be introduced quickly by any organisation requiring customer ticketing.

“It’s an off-the-peg solution,” says Murdoch. “Businesses can brand it as their own product and it’s simple for them to, for example, change prices.”

With an eye to speeding up boarding, the firm has also introduced Near Field Communications. It allows for an NFC tag to be used with an m-ticket in conjunction with both Android and Apple iOS.

“When operators know how customers are using their services then they are better positioned to make improvements as well as take advantage of targeted mobile marketing opportunities,” says Hertfordshire county council passenger transport manager Matthew Lale.

Corethree says that all the data it aggregates can help operators generate extra revenue from the development of products tailored to appeal to individual passengers. If they know that certain individuals travel to particular locations regularly then they can talk to retailers and service providers about providing vouchers designed to drive customers to particular outlets in the area concerned; to coffee shop A rather than coffee shop B for example.

“You might learn from the data that a passenger uses the bus from Monday to Friday, but not at weekends,” says Murdoch. “What you can then do is come up with incentives that encourage them to use it at weekends too.”

The roll-out of 5G will enable a lot more data to be handled, he points out.

Much of this data can be obtained anyway, not through m-ticketing or apps but by tracking people using their mobile phones says Sam Glover, founder and chief executive officer of LetsJoin.

This does not mean that the individuals themselves can be identified or that their texts, emails and browsing history can be harvested, he says. What it tells you is that somebody with a particular phone boarded a bus at a particular stop, then got off, say, five stops later.

Aggregating the data allows operators to see which routes or sections of routes and stops are the most heavily used, and when that usage takes place. Service frequencies, routes and the size of the buses that are going to be deployed on them can be planned accordingly.

“What we’re doing is tracking the movement of people through passenger networks,” says Glover. Some 3,500 buses run by various different businesses are involved.

It is of course worth emphasising that any data collected for whatever purpose has to be handled in line with the requirement of the General Data Protection Regulation (GDPR) and that all of the safeguards it imposes must be observed. LetsJoin’s activities comply with GDPR, stresses Glover.

LetsJoin can also provide operators with a news feed designed to reduce the onboard wi-fi data costs they incur and with content that should hopefully interest passengers. Local stories are prioritised over what is happening UK-wide or globally.

While many travellers can barely function unless they have got a smartphone in front of them, others prefer older-established methods of communication.

Omnibus Solutions has been steadily developing OmniSTOPdesign which it says enables users to create accurate printed timetables tailored for display at each individual stop. It draws on timetable data compiled by Omnibus’s OmniTIMES package.

Well-known as a source of printed blinds and other types of destination display, McKenna Brothers has provided LED displays for 19 ADL Enviro400 City double-deckers that have just gone into service with First Eastern Counties. They should make it easy for waiting travellers to see where an approaching bus is heading.

Worth some £5.3million, and all on Scania platforms, the double-deck buses are being deployed on the long-distance Excel route linking Peterborough and Norwich.

Not surprisingly, all the newcomers feature free wi-fi, USB sockets, and seatback smartphone charging with phone docks. Technology is on the march, and all customer-conscious operators are embracing it.