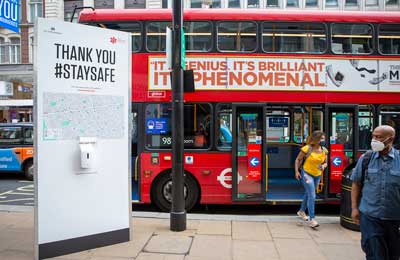 Grayson Thermal Systems has developed a new solution to protect bus drivers against Covid-19 with a new way of pushing air around their cabs. Commissioned by Transport for London and using expert advice from University College London, Grayson Thermal Systems came up with a way of changing air-conditioning recirculating systems into units that circulate fresh air into the driver’s cab from outside the vehicle.

The company’s engineers took just three weeks to come up with the prototype solution and was then invited by eight London operators to convert more than 1,200 buses over a two-month period, meaning all 9,300 buses in London’s fleet meet TfL’s driver safety guidance and new specifications.

The work complements other measures initiated by TfL to protect bus drivers against Covid-19, including improving the screen around the drivers’ cabs to prevent the virus entering the cab area and a rigorous cleaning regime.

Ian Hateley, group aftermarket director, Grayson Thermal Systems, says: “The loss of London bus drivers to the pandemic is tragic and we were pleased to be part of a solution to build on TfL’s existing safety measures to reduce the potential spread of the virus.

“We looked at our existing air-conditioning systems and developed a way of converting them so that they created positive pressure in the enclosed driver cabin, forcing existing air out and replacing it with air from outside the bus.

“Now complete, the modification gives in excess of 100 air changes per hour within the driver cabin and ensures that a wider initiative to seal the driver cabin away from passengers is enhanced, as air is no longer moving from the entrance into the cab area.”

Grayson created a new positive air retrofit unit for each vehicle type among the 1,200 vehicles. Six centres were set-up across London and a 15-strong team of engineers from Grayson Thermal Systems and Alexander Dennis were trained up for the project.

All 1,200 air-conditioning systems were additionally health-checked upon modification and a triage system was set up to rectify any vehicles where faults were identified within the standard five-year warranty.

“This was a massive logistical task and one that we overcame as every partner in the project was fully on board, so that we could make the changes as quickly as possible and further protect London bus drivers who are doing a great job,” adds Hateley. “In the end, the final project delivery came in ahead of plan for every site.”