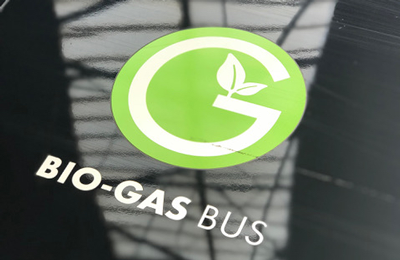 Built by ADL at its plant in Falkirk some 25 miles away on a battery-electric platform sourced from BYD’s factory in Hungary, they are being funded using money from a Green Economy Fund established by SP Energy Networks. The £20million fund supports Glasgow’s mission to become the UK’s first net zero emissions city by 2030.

SP Energy Networks is the distribution arm of ScottishPower.

Fitted with 330kWh batteries, the 36-seaters are being deployed on the M3 route which connects communities in Milton and Springburn with Stobhill Hospital and the city centre.

“Every customer journey on the route will save around 2kg of CO2 compared with driving on your own in an average car,” contends First Glasgow managing director Andrew Jarvis.

Rear-view cameras have been fitted instead of rear-view mirrors and the vehicles are equipped with free wi-fi, USB charging points and an audio-visual system that announces the next stop.

The newcomers are being charged up overnight at the operator’s Caledonia depot. Twenty-two charging points are being set up as part of the SP Energy Networks £1.5million funding deal in anticipation of more electric buses joining the fleet.

The new arrivals are the first electric models to be deployed on services in the city since the last trolley buses were scrapped by Glasgow Corporation in May 1967.

They are not the only Enviro 200EVs to go into service in the Glasgow area. Three 10.8m models have been deployed at the city’s airport to shuttle passengers between the terminal and the long-stay car park.

Operated by NCP, they are fitted with three-tier luggage racking, two doors and 23 seats. Their introduction has been supported by funding from Transport Scotland.

Over 400 miles to the south, Go-Ahead London has added a further 11 Enviro200EVs to its fleet, all 9.6m 24-seaters with an overall capacity of 66 passengers. The 9.6m is a new derivative.

With a range of 150 miles between recharges according to BYD ADL, their arrival means that the fleet now boasts 100 Enviro200EVs. Another 13 are scheduled to arrive in March.

Heading back north, First Bus is partnering with Yutong, its UK distributor Pelican Bus & Coach and Zenobe Energy to roll out nine electric buses in Leeds. All E10 10.8m single-decks, the Yutongs are to be based at First’s Hunslet Park depot.

Zenobe has come up with a package that includes the charging points, a bank of batteries to store the energy they need thereby overcoming grid constraints, the vehicle itself and a replacement battery pack if required. The precise details of the package depend on what the individual client wants.

“We translate all this into a pence-per-mile charge or a fixed monthly fee,” says Steven Meersman, one of Zenobe’s founders. “Then we guarantee that the bus will be charged, pre-heated and ready to go first thing in the morning when the operator needs it.”

Based in London, the business was set up three-and-a-half years ago with the aim of getting the power required to recharge electric buses into depots in an economic way.

Backed by £120million of funding, Zenobe manages the charging regime, turning the power on and off as required. If it is not being used by buses, then the energy held in the battery bank can be sold back to the National Grid, says Meersman.

In addition to its activities in Leeds, Zenobe is involved with Newport Transport, which is taking 15 Yutong E12s, and Stagecoach, which is running nine Enviro200EVs on a park-and-ride service in Guildford. Another client is Abellio, soon to deploy 34 Caetano e.City Gold 10.7m single decks on two routes in London.

What does Zenobe do with an electric bus’ batteries as they get older and are incapable of holding the same level of charge that they did when they were new? Having been replaced after from five to eight years of service, they are taken away and used for static storage.

“They may go to a data centre to provide power back-up for instance, or to help support the National Grid,” Meersman explains. “We extend their useful life.”

Battery power is by no means the only alternative fuel solution open to operators. Nottingham City Transport has embraced environmentally-friendly compressed natural gas while Transport for London (TfL) is exploring the advantages of buses capable of running on hydrogen fuel cells; a technology that has been the subject of an extended trial in Aberdeen.

Large numbers of diesel buses and coaches remain in service however, and many of them require upgrading to the latest Euro VI exhaust emission standard. At a cost of from £14,000 to £18,000, doing so does not come cheap.

One local authority that recognises that this is the case is York City Council, which is introducing a Clean Air Zone (CAZ). It has awarded more than £1.6million to five bus companies to fund the necessary retrofit technology.

TfL’s programme to upgrade the capital’s diesel buses to Euro VI continues apace. Some 3,200 have been retrofitted to date with around 1,000 more to go says Eminox retrofit product manager Toby Stevenson-Cocks.

“We’ve retrofitted over 1,800 ourselves,” he says. “Demand is more fragmented elsewhere in the country though.”

Much will depend on the individual requirements of the various CAZs as they come into force.

“So some operators are adopting a ‘wait and see’ approach,” he observes. “That said, work outside London is starting to pick up, and we’re getting a lot of enquiries.”

Eminox’s retrofit SCRT system features Selective Catalytic Reduction, which entails the use of AdBlue, plus a Continuously Regenerating Trap; a particulate filter.

The SCRTs deployed in London are warranted for two years and serviced annually by Eminox’s engineers.

“We replace the filters and the injector and check the wiring,” says Stevenson-Cocks. “It takes around a couple of hours.”

TfL requires telemetry to be installed so that particulate filters that are becoming blocked can be quickly identified.

Eminox arranges for them to be removed and sent away to be cleaned. In the meantime it installs another filter so that the bus can continue operating while the work is done.

Eminox has also been busy developing retrofit systems for coaches; a challenging area because each model is produced in comparatively small volumes, and design details may vary significantly within model ranges.

“There is not going to be a solution for each vehicle, and in some cases it may make sense to sell the coach you’ve got and buy a second-hand one that you are sure can be upgraded,” Stevenson-Cocks advises.

As things stand Eminox can upgrade coaches that use a Volvo B9R platform and can help operators with Mercedes-Benz Tourismos too. “We’ll have a system for Volvo B12s soon, and for DAF-engined Van Hools,” he says.

It is doing so in conjunction with Grayson Thermal Systems (GTS), which is contributing its eDrive electric radiator fan system. The way in which eDrive works helps to increase exhaust pipe temperature, enabling HJS’s retrofit system to function more effectively.

ATT has helped with the installation of over 1,000 HJS retrofit packages and is involved in a variety of bus and coach related areas. Among other things it supplies onboard fire suppression equipment, runs an AdBlue pump service exchange scheme and can provide a hybrid service exchange battery pack under the E400HX banner.

Standard pre-Euro VI diesel buses are not the only ones that may require retrofitting to bring them up to the emissions standard mandated by London’s Ultra Low Emission Zone (ULEZ) and by CAZs.

Proventia’s UK partner Excalibre Technologies was kept busy early last year retrofitting over 300 of London’s Boris Buses with Proventia’s NOxBUSTER City technology. Introduced by prime minister Boris Johnson when he was the capital’s mayor, and now regularly referred to as the New Routemasters, the hybrid double-decks concerned are Euro V, and needed upgrading to Euro VI to meet ULEZ requirements.

“Clean buses play a vital role in tackling London’s toxic air,” he observes. “We’re moving towards a zero-emission future, but the work Proventia and Excalibre have done to help us green up our existing fleet has been helpful in immediately improving the air for thousands across London.”