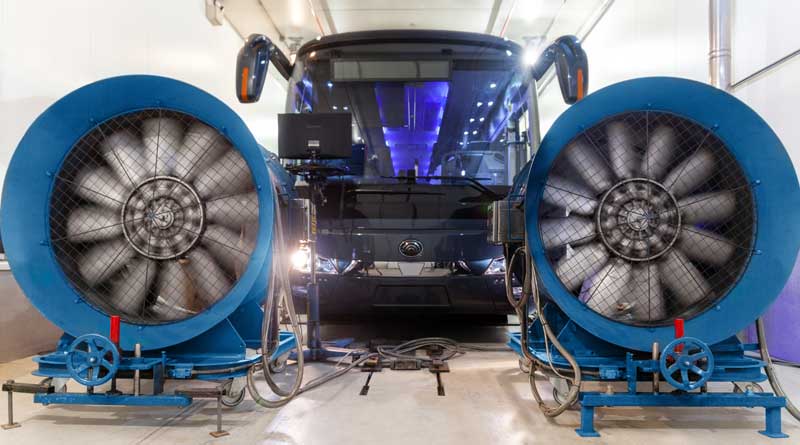 Chinese bus manufacturing giant Yutong has seen impressive returns from its investment in the UK market to date, with its partnership with Yorkshire-based dealership Pelican Bus and Coach leading to more than 500 coaches registered to date. It has also just achieved the first certification for a coach under the Ultra Low Emission Bus scheme, and is about to deliver its first production buses in the UK with 14 E12s going to Newport Transport and 9 E10s for First Leeds.

Head of Yutong Bus UK, Ian Downie is evidently relishing the opportunity to see Yutong bus fleets in operation this year: “The initial two demonstrators have been very well received by operators, and we are now looking forward to having our product in the market”.

There are also further bus orders in preparation with nine E10s for Go-Ahead in Gateshead and 13 E12s to be operated by Roberts Travel on a Leicester City Council park-and-ride contract.

The achievement of ULEB certification for Yutong’s TCe12 zero emission electric coach is a significant milestone, according to Downie, providing a clear demonstration of the potential of zero-emission coaches that LowCVP can use to persuade government to support the development an Ultra Low and Effectively Zero Emission Coach definition that could be adopted by schemes such as the Plug-in Vehicle Grant.

The TCe12 ULEB certification also strengthens the commercial case and offers a tangible benefit for certain types of operation. For example, it enables the coach to qualify for the Enhanced BSOG incentive in Scotland which now offers 30p/km, something that will be reflected in a forthcoming contract for an interurban initiative using TCe12s in Scotland.

“The forward thinking support from the Scottish Government with the BSOG LEV scheme provides a real incentive for operators to look at the benefits of zero-emission vehicles,” adds Downie.

And of course, Westway Coaches already operates Yutong electric coaches, one of which saw service during the 2019 general election.

The bus business is of course a volume game however, and Yutong will want to maximise its share of the shift towards zero emission vehicles. Pre-Covid, the prime minister announced ambitious plans for up to 4,000 EV buses in the UK in five years. But with a government struggling to steer a course through the pandemic, it has left precious little time to focus on the detail of implementing this policy, as Downie confirms.

“I think that the fact that the government said it will put 4,000 zero-emission buses into service is great, but we are still waiting to see how these vehicles will be mobilised,” he says. “There have been no announcements so far about how much money may be available to the industry to support this policy.”

Downie points out that Yutong is ready and able; it has put some 106,000 EVs into service over the past 20 years and could probably fulfil an order for the entire 4,000 UK buses in less than six months.

“Covid has shown the impact on air quality of having less vehicles on our roads – you can smell and taste it,” says Downie. “Right now we should be grasping the opportunity to get zero-emission buses, trucks and vans into service and making sure we don’t go backwards.”

Of course, zero emission doesn’t have to mean electric. Yutong does have experience with hydrogen fuel cell. It has 47 hydrogen buses in operation in China and is on its fifth generation of the technology.

However, Downie says that hydrogen technology is not yet mature enough for the UK market. Electric buses are the number one choice for the majority of bus routes, but hydrogen will play its part in vehicle operations. He is confident that the range of electric buses is proving capable of a full-day’s service on a single charge, with battery density improving markedly in recent years. The initial two Yutong demonstrators had battery capacities of 295 and 324kWh, while the new buses about to be delivered offer 422kWh.

Pelican has proved to be an adept partner for Yutong in establishing a foothold in the UK market for the world’s largest bus and coach manufacturer. Downie points out that the Yorkshire company has been around for 101 years and is clearly focused on being in the game for the long term.

“It may not be business-as-usual at the moment, but we are here to support our customers and operators and keep the wheels of bus and coach businesses turning.”