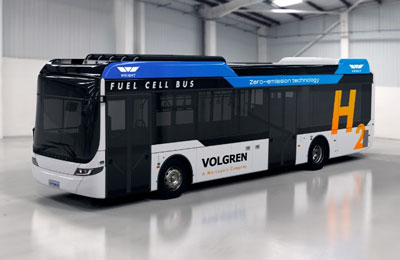 Wrightbus has signed a deal with Australia’s leading bus body builder Volgren that it believes could open up a significant export market for the Northern Ireland-based manufacturer.

Wrightbus is partnering with Volgren to provide its hydrogen fuel cell powertrain technology for the manufacture of two zero-emission hydrogen single-deck buses which will be the first European-Australian hydrogen vehicles in the country.

Wrightbus hopes the first two buses will be the start of many as Australia looks to replace tens of thousands of buses with zero-emission vehicles over the next decade to hit its net zero commitments. The vehicles will be powered by Wrightbus NexGen hydrogen fuel cell powertrains which will be built in the Ballymena factory, and are the same as those used in Wrightbus’  StreetDeck Hydroliner double-deck and GB Kite Hydroliner single-deck buses.

The Wrightbus-Volgren buses are expected to be ready for trial in the first few months of 2023.

“We believe the scope for uptake across the Australian market is huge as the country makes the vital switch to zero-emission vehicles. We’re excited to be in from the start.”

Thiago Deiro, Volgren chief executive officer, adds: “We believe that hydrogen has an important place in Australia and Wrightbus is one of the most important global players in hydrogen buses. We are confident the partnership will help speed up the deployment of hydrogen buses in Australia.