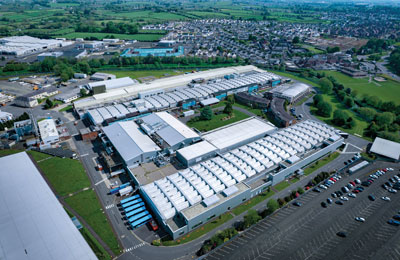 Wrightbus plans to create up to 300 permanent jobs after winning bus orders from the UK and Ireland. The Ballymena-based company, also says it aims to convert 120 existing temporary jobs into permanent positions as it looks to ramp up production.

The firm, which was bought out of administration by green entrepreneur Jo Bamford in October 2019, had just 56 members of staff when he took over. At its height, Wrightbus employed more than 1,000.

Following its launch of new models including hydrogen and electric double-deck buses, the company says it is on track to have 930 permanent employees once the new positions have been filled.

Wrightbus hopes the job roles, which will include skilled, semi-skilled, general operators and support staff, will all be filled in 2022.

“It’s a fantastic success story, and not one many people would have imagined just a few short years ago,” says Wrightbus MD Neil Collins.

“In the last two years, the company has not only been brought back from the brink, but has been reinvigorated and has seen a period of phenomenal growth.

“Our order book is looking very healthy with our zero emission buses in high demand, and we have multiple conversations ongoing with a number of bus operators from across the UK and Ireland. And let’s not forget that this has all been achieved despite the terrible effects of the global pandemic over the past 18 months.

“We’re building an incredible team in Ballymena and we want the best people to come and work for us. We’re aiming to increase bus production again next year, which will lead to the creation of even more permanent jobs. It’s an incredibly exciting time to be involved with Wrightbus.”