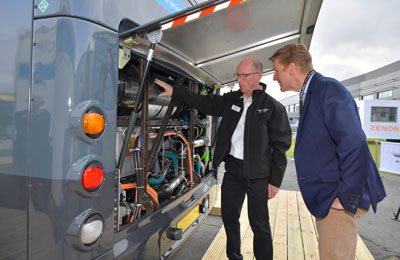 The Electroliner has a French battery pack which delivers 454kW and a 200-mile range, and will recharge in under three hours.

Wrightbus was bought out of administration by entrepreneur Jo Bamford in October 2019, since when the company has launched a world-first hydrogen bus as well as a telematics system to give real-time updates on performance, maintenance and CO2 savings.

CEO Buta Atwal says: “We have gained a strong reputation for our hydrogen double deck but we want to lead the world in zero-emissions full stop.

“Wrightbus has the best brains in the business when it comes to technology and our StreetDeck Electroliner puts us squarely at the front of the pack.

“We haven’t weighed the bus down with a high battery volume just so we can say it’s got the most power or range; instead, we want to be the most efficient vehicle on the road so we’ve combined optimum power with a class-leading rapid charge meaning our electric bus spends more time on the road than any other.”

Wrightbus’ hydrogen-fuelled bus is already in operation in Aberdeen, London, Belfast and Dublin, and the Ballymena-based company says it is in discussions with operators from the USA, Australia, South America and the Far East.