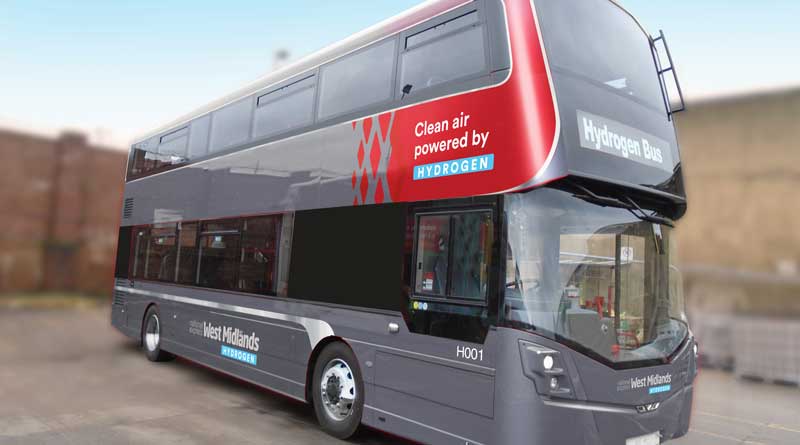 Birmingham City Council has purchased 20 new hydrogen double-deck buses as part of a Clean Air Hydrogen Bus Pilot which aims to kick-start the hydrogen market as a viable zero-emission fuel with the procurement and deployment of hydrogen buses. The Wrighhtbus vehicles will be delivered to National Express West Midlands from April 2021.

The pilot project is designed to be the catalyst for the next generation of hydrogen buses, hydrogen production and re-fuelling infrastructure development. The council is also working with ITM, which will be producing and dispensing the hydrogen fuel from a new re-fuelling hub at Tyseley Energy Park.

It has taken us two years to get to a point where we can ensure commercial viability for this type of fuel cell technology and is great news for our city and the rest of the region.”

Jo Bamford, chairman, Wrightbus adds: “We have an opportunity with hydrogen-powered transport to make a huge difference to air quality.

“But this fleet of buses represents much more than Birmingham striving to reach a clean air, zero-carbon future. It represents the start of what could be a world-leading UK hydrogen economy which will bring with it multi-million-pound investments and tens of thousands of jobs.”

The development will see the start of fuel cell technology supply chains within the region and will help to support a new service and maintenance apprenticeship programme. It has been funded through OLEV (Office for Low Emission Vehicles), GBSLEP (Greater Birmingham & Solihull Local Enterprise Partnership), Birmingham City Council and JIVE project funding from the FCH JU (European Funding from the Fuel Cell Hydrogen Joint Undertaking).