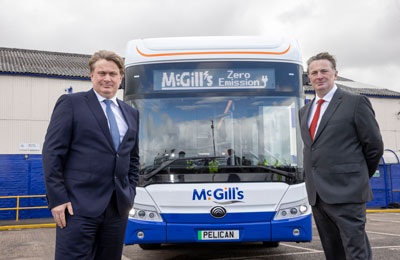 New infrastructure is being installed by Zenobē to fully electrify McGill’s depots in Johnstone, Inchinnan and at Xplore Dundee.

The project will be completed ahead of the delivery of 68 electric vehicles to McGill’s following a £32.5million investment partly funded by the Scottish Government’s Scottish Ultra Low Emissions Bus Scheme, which was set up to help drive the adoption of sustainable transport in Scotland.

The buses will be delivered in the autumn and will see the McGill’s Group operate the largest electric fleet in Scotland as COP26 gets underway in Glasgow in November. McGill’s is electrifying its depots and it is estimated that it will need around 28MWh of energy to charge the buses in all three sites.

Ralph Roberts, chief executive, McGill’s Group, says: “The introduction of electric vehicles will lead to a huge reduction in CO2 emissions from our operations and McGill’s is excited to be leading the way with the largest electric fleet in Scotland operational by COP26 in November. Transforming our depots to get ready for these new buses is a hugely important part of the jigsaw and we’re delighted to start that process with Zenobē Energy today.”

James Easdale, chairman of McGill’s Group, adds: “We firmly believe the new electric fleet will entice more people to leave their car keys at home and switch to the bus.

“Electric buses bring a new level of passenger experience, including air conditioning and USB charging, coupled with a whisper quiet journey. It’s an exciting time for McGill’s as we continue to invest and grow the business even further.”