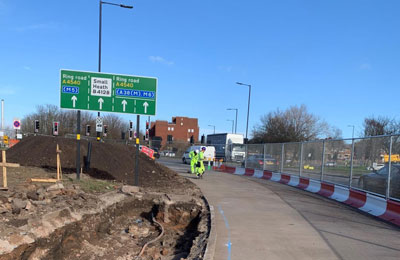 The Sprint bus corridor along the A45 and A34 will feature new and extended bus lanes and give buses priority at junctions to beat traffic jams, leading to quicker and more dependable  journey times, and giving bus passengers a better travel experience that allows them to spend less time commuting each day.

Construction work has now started on Small Heath Highway in Birmingham, with work in Walsall, Sandwell and Solihull due to start later in the year.

As well as supporting local construction jobs as the region recovers from the pandemic the improved bus services will play a part in achieving the #WM2041 ambition to reduce the region’s carbon footprint, according to Transport for West Midlands.

Over 95 enhanced bus shelters will be introduced along the route, offering easy access to vehicles, reducing the time the bus needs to spend at a stop and allowing for more reliable onward travel to key destinations.

Sprint, Birmingham’s first uninterrupted cross-city bus priority route, will be built in stages, with phase 1 due to be ready in time for the Birmingham 2022 Commonwealth Games. It will link key venues at the NEC, Birmingham city centre and the Alexander Stadium.

A second phase of bus priority measures will then be delivered on the route after the Commonwealth Games, to further improve bus journey times.

Mayor of the West Midlands Andy Street says: “Before lockdown we were seeing increases in bus passenger numbers across the region thanks to investment in areas such as contactless payment, simplified fares and live travel information.

“Now with dedicated bus lanes and priority at traffic lights Sprint will offer improved reliability and offer a high quality service on the A45 and A34 which can be a real alternative to the car.”