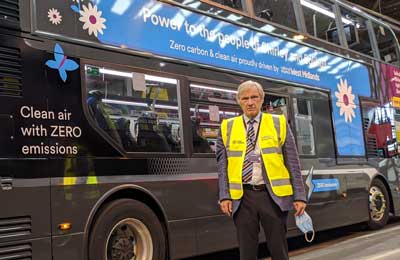 Mayor of the West Midlands, Andy Street, marked Zero Emissions Day last month by welcoming National Express’ commitment to having an all-electric bus fleet. National Express has been expanding their fleet of electric buses in the region – and recently pledged never to buy another diesel bus in the UK.

Currently the company has 19 electric buses in service in Birmingham and Solihull and ten running in Coventry to the university and the hospital.

In addition, the company is working with Transport for West Midlands and local authorities to make Coventry or West Bromwich an all-electric bus city or town respectively. By the end of the year they will find out the outcome of the bid to be chosen as Britain’s first town or city to have only electric buses as part of a Government scheme to make fleets greener.

“As mayor of the West Midlands I’m working to ensure our energy is focused on bringing about a green energy future for the region,” says West Midlands mayor Andy Street. “From support for new-high tech industries – such as our work to bring a battery Gigafactory to the region – to our recently relaunched regional ‘Starley’ cycle network, and our expansion of the West Midlands metro, our plan for the region is an environmentally friendly one. That’s not just because clean energy helps secure the future of our planet, it’s also because our plan will help secure high-skilled ‘green’ jobs of the future.

“That’s why we set our ambitious #WM2041 target – and it’s why these electric buses are an important step on our journey to reach it.”