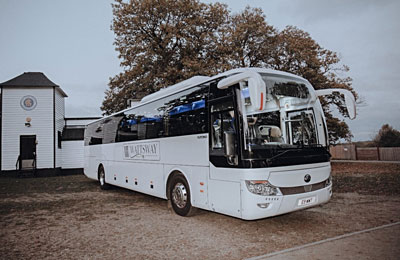 Surrey-based Wattsway Travel’s first electric coach followed a six-figure funding package from Paragon Bank, via broker, Stoke Park Finance. A 53-seat Yutong TCe12 electric coach, capable of a range in excess of 200 miles on a full charge, will primarily be used to service contracts for schools in south west London and is the first electric vehicle in the company’s nine-strong fleet.

Wattsway Travel estimates that the vehicle will remove 414kg of CO2 compared to a diesel vehicle of a similar size with a Euro 6 engine over a 10-year period, based on 44,000 miles per year.

Wattsway Travel was founded in 2017 by Mark Watts who says: “I have been delighted with the performance of the coach and I would like to transition the fleet towards being predominantly electric over the next four to five years. The majority of our work is within urban areas, so they are the ideal solution.

“We have a number of contracts with schools and the pupils were increasingly asking why we were using diesel vehicles when electric options were available. As a country, we are becoming more accepting of – and enjoying – electric vehicles and that is now extending to commercial vehicles.”

Paragon Bank’s Fraser Tilley adds: “We were delighted to support Mark and Wattsway Travel with this funding. Companies such as Wattsway Travel are pioneering new ways of operating and making the important steps we require as we move towards net zero by 2050. Paragon is keen to support a range of green assets and this is a great example of how we can support a new type of asset.”