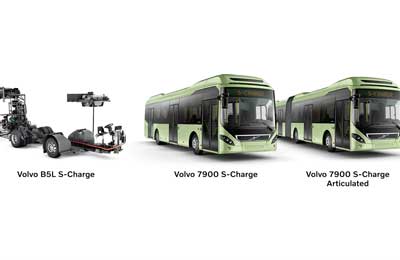 Volvo is recasting its hybrid buses as ‘self charging buses’ with a newly branded S-Charge model range upgraded with new capabilities including electric propulsion that can be used at speeds of up to 50 km/h compared to the previous 20 km/h.

Depending on climate and topography, the Volvo S-Charge can run on electricity for up to 1 km and the upgrade also includes improved connectivity and Volvo’s system for geo-fencing, Volvo Zone Management, which makes it possible for the operator to program the bus so it automatically switches to electric propulsion within selected areas and has its speed regulated without driver intervention. It is also possible to define zones for sustained self-charging, to ensure emission-free operation in an upcoming zero-emission zone.

“We are now expanding our customers’ possibility for harnessing the benefits of electric power while at the same time retaining the impressive flexibility offered by hybrid buses,” says Håkan Agnevall, president, Volvo Buses. “The new S-Charge model range can be deployed on any route since no charging infrastructure is needed, which enables fast implementation and improved operational efficiency for our customers.

“The new S-Charge models are among Volvo’s cleanest buses and will reduce the carbon footprint by up to 40 per cent compared to equivalent diesel buses. The S-Charge can also drive on biofuel, reducing CO2-emissions even more. It is probably the most fuel- efficient and reliable self-charging bus on the market.”