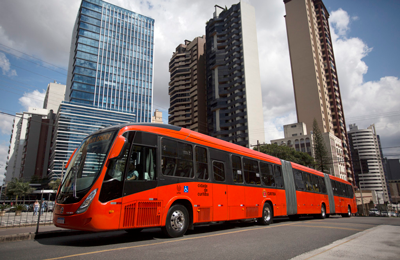 Volvo Buses is again one of the main vehicle suppliers to the city of Curitiba’s transportation system. In 2020, Volvo Buses has delivered 6 bi-articulated, 13 articulated and 21 conventional buses to the city.

“We are back to having a leading position in bi-articulated buses in the city and in the market. In addition, we have significant deliveries in the entire HD vehicle segment, which also includes articulated and conventional buses,” says Fabiano Todeschini, president, Volvo Buses Latin America.

Curitiba is regarded as the origin of Bus Rapid Transit, the concept that deploys buses travelling in exclusive lanes or corridors, with the bus floor at the same level as the bus stop platform to aid boarding, and pre-paid fares to promote a faster and more fluid passenger transportation experience. Developed in the city in the 1970s, the system served as an inspiration for a number of other metropolitan areas around the world, in particular in Latin America.

At the start of the previous decade, however, many factors were constraining fleet renewals, and this trend has now been reversed in recent years.

“As partners since the beginning of BRT, we are very pleased that the city is once again starting to invest in new buses, keeping the focus on safety and quality,” says Paulo Arabian, bus commercial director, Volvo Brazil.