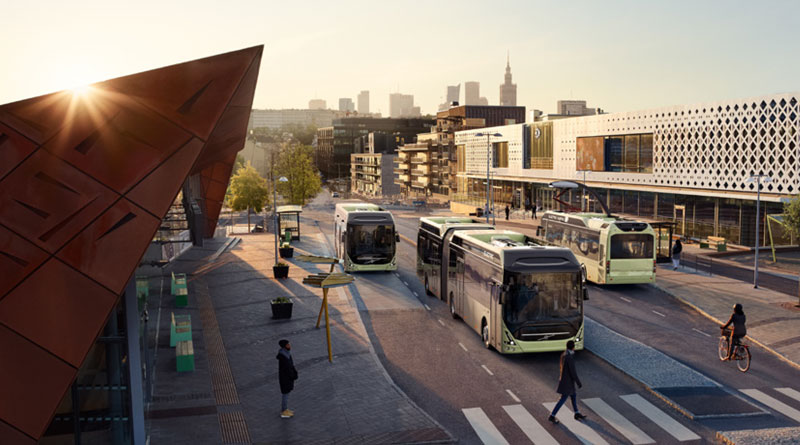 When is the right time for a city to make the transition to an electric bus system? The answer to that question is really yesterday, according to Volvo Bus head of public affairs Lars Johansson in the manufacturer’s latest Mobility Insight published last month. In a timely reminder as the world prepares for COP26 in Glasgow this November, Johansson points out that in order to meet the Paris Agreement’s climate goals of completely fossil-free transport by 2050 to slow down global warming, there is a need for urgent action.

He points out that some world regions have clear goals established, but there are wide variations in the commitments being made, including the willingness of governments to help underpin the investment needed in new vehicle technologies and infrastructure.

For example, in December 2020, EU countries agreed on a new climate goal for a 55 per cent reduction in CO2 emissions by 2030 compared to 1990 levels, whereas China already boasts around 90 per cent of all electric buses in the world in operation, largely due to large subsidies for manufacturers and operators in recent years.

Johanssen adds that in the US and Canada, there is usually a very high portion of federal funding for the purchase of new buses, but in Europe, there remains a traditional tender-based approach with little state support for the purchase of electrified buses.

“Despite this, many cities have taken important steps towards electrification, and the EU’s Clean Vehicle Directive will accelerate the transition,” says Johansson. “Recently, the same electromobility trend can be observed in Latin America, mainly in progressive cities like Santiago in Chile and Bogotá in Colombia.”

But Johansson points out that operating life of vehicles is a key factor for the transport sector. “There is a long lag because the buses purchased today
will normally run for around ten years. This means that if you do not quickly phase out buses that run on fossil fuels, it will take a long time before CO2 emissions can be reduced.”

The EU Commission’s Clean Vehicle Directive will take effect in 2021 and will affect all procurements that include city buses. For all EU countries, this means that a certain proportion of buses procured must meet the definition of a ‘clean vehicle’, according to a set quota per member country. In Sweden, for example,  45 per cent of all buses purchased before 2025 must be zero emission or low emission, of which at least half must be zero emission buses. The proportion differs among the member countries, but for most the quota will be the same as Sweden, according to Johansson. The levels will then be raised to 65 per cent from 2026 until 2030. Beyond that, no decision has been made.

In terms of the timescale for large-scale implementation of EV buses, Johansson asserts that it can take at least 18 months from the start of the process to when buses can be put into service. He points out that one of the biggest differences between the procurement of electric buses and conventional buses is that there are many more stakeholders involved. In addition to the public transport authority, the bus operator and the manufacturers of the buses and charging infrastructure, the city municipality, electricity providers and other relevant stakeholders, must also be involved at an early stage.

“Careful planning and close cooperation between the various stakeholders are prerequisites for being able to take the step to large-scale implementation,” says Johannson.

One example that he points to of a successful collaborative project is ElectriCity in Gothenburg where the city’s first electric buses were put into service as early as 2015 and the project has attracted tens of thousands of visitors from all over the world. The municipality, the PTA, Västtrafik, local energy supplier Göteborg Energi, bus operator Keolis, Chalmers University of Technology, Volvo Buses and other stakeholders have all been involved in running the project.

With the experiences and lessons learned from ElectriCity, Gothenburg has now taken the step towards large-scale implementation, and in December 2020, 145 Volvo 7900 Electric Articulated buses were put into service. The goal for the region is to electrify all its city bus traffic by 2030.

Securing enough energy capacity is crucial when implementing electric buses. Volvo estimates that over a period of 12 years, the total energy usage for 100 electric buses (12m models) is 97,200MWh. This is equivalent to powering 400 private houses during the same period.

The need for common industry standards with open interfaces for charging infrastructure is also important for the large-scale roll-out of EVs. Johansson argues that all buses, regardless of brand, must be able to use the same charging stations. International bodies have been working on this topic for many years, and in Europe the bus industry has agreed on standards that should apply.

UITP was commissioned by Cenelec (European Committee of Electrotechnical Standardization) to submit a proposal to the EU Commission. This was presented in 2019 with four standards proposed: depot charging via CCS cable, opportunity charging via roof-mounted pantograph, opportunity charging via station-mounted pantograph and charging via an electric contact on the road, which is likely to be used only in rare cases. Finalisation of the various standards will be decided in late 2021 and the EU Commission is expected to publish the final charging standards at the end of the year.

Electrified public transport offers a wide range of benefits to society in reducing environmental impact, primarily in terms of the reduction of greenhouse gas emissions, nitrogen oxides, particles and noise.

In Gothenburg, for example, by replacing the cleanest diesel buses on the market with 145 new Volvo 7900 Electric Articulated buses, the city says it will reduce its CO2 emissions by 14,500 tonnes per year. This is about the same as the CO2 from around 5,000 cars. Simultaneously, emissions of nitrogen oxides will decrease by approximately 8,000kg per year and emissions of soot and other hazardous particles will be reduced by 200kg.

Noise reduction is an added benefit of electric buses with estimates of each bus’ noise level being reduced by 7dB, halving its perceived noise emissions compared with a conventional bus.

An electric bus also consumes 80 per cent less energy than a diesel bus. The energy savings for the fleet of 145 Volvo 7900 Electric Articulated, which drive a total of 60,000km per year at an average speed of 18km/h, is estimated at 32,200MWh per year; the annual energy requirement for 1,600 private households.

The paper also addresses the question of how clean the electricity to power EVs is from a CO2 point of view. Depending on whether the electricity is produced from renewable or fossil sources, the carbon footprint – from well to tank – can vary from as little as 10g to more than 1,000g of CO2 per kWh.

“Even though many countries globally still produce a relatively high proportion of their electricity from fossil sources, a positive trend is observed,” says Johansson. “A very large proportion of new European energy plants will produce renewable energy. This is also the case for certain countries outside Europe.”

Johansson concludes with identifying the most important success factors for the implementation of electric buses. The first priority is political will which is where it all begins, he says: “Making the transition to an electric bus system requires political will, vision and a political decision. It also requires a long-term system approach and knowledge of what electrification actually means, its effects, and the opportunities it creates.”

And finally there is a need for a comprehensive analysis of the complete requirements including route distances, topography, climate, passenger numbers, traffic density, bus types and battery capacity, all of which affect the most optimal charging infrastructure.

The full paper is available here and further Mobility Insights on other topics are available at www.volvobuses.com