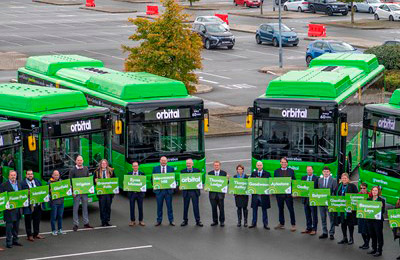 A new electric bus service taking passengers on an orbital route connecting key sites around Leicester has been launched. The Orbital service, which replaces the 40 Circleline service and claims to be the UK’s longest electric circular bus route, will connect estates and suburbs on the city’s outer ring road and beyond, with locations such as shopping centres, hospitals and other key transport infrastructure.

It is the latest addition to the city’s Greenlines electric network, and is the fifth new service to be launched using the new council-owned electric buses. The partnership project, with operator Centrebus, also includes a brand-new electric bus charging depot at the firm’s Thurmaston depot.

The electric buses and charging depot have been partially funded (£1.21million) by the Department for Transport’s Zero Emission Bus Regional Areas scheme, and this is the first ZEBRA-funded project to be delivered in the country.

The new service replaces the 40 Circleline service and will come into operation on October 24.

“Launching the Leicester Buses Partnership back in April has meant we’ve been able to work very closely with the city’s bus operators to bring forward projects like this to make top-notch public transport accessible to more people while being committed to tackle emissions and the climate emergency.”

David Brookes, director, Centrebus, adds: “They’re the first electric buses in the country to hit the road funded through the Government ZEBRA scheme which is testament to the speed at which the city council and our fellow partners have delivered this project. These buses will not only improve air quality but will encourage people to leave their cars at home and use public transport. We’re proud to be part of the Greenlines network and the wider Leicester Buses project.”