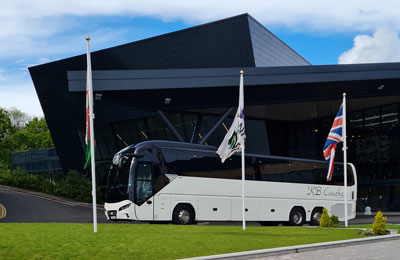 KB has been operating for around 40 years and has a fleet of 20 vehicles – the average age of which is approximately three years. It specialises in services for schools and sports teams, but the fleet also includes two minibuses for airport work.

KB decided to pursue Earned Recognition status around two years ago. “We read some articles in the trade press and spoke to one or two DVSA reps,” says director Andy Francis. “You agree to all the standards of Earned Recognition when you get your Operators Licence, so it’s basically just making sure that you’re doing everything you said you would and ensuring compliance is a key metric across your fleet.”

At the time, the company was already using two of TruTac’s products to assist with its day-to-day operations.

“We started with TruCheck about four years ago, just for our own peace of mind,” adds Francis. “It was to make sure the daily walkaround inspections were being done correctly and in the best way possible. They can be geolocated, time-logged and the driver takes pictures, because they carry out the checks via an app on their phone.”

The company also adopted TruTac’s TruAnalysis PSV tachograph analysis system for PSV operators as it synchronises with data collected during walkaround checks. This provided the company with all the data in one place instantly.

The move to Earned Recognition saw the company take on more of TruTac’s systems, including the TruFleet vehicle maintenance management programme and the TruLicence licence verification software. Those additions allowed KB Coaches to submit KPIs to the DVSA to prove its compliance and management credentials which, in turn, means its vehicles are less likely to be subject to routine stops by traffic officers – one of the benefits of the scheme.

“We added those systems to show that we’re fully compliant and consistently meet the DVSA’s standards for Earned Recognition,” says Francis. “It’s also just so much easier managing things like maintenance digitally. All of the systems seamlessly work with one another, so the driver knows when the vehicle’s due an inspection in the garage – it just comes up during his walkaround check.

“The simplicity of the system and the full integration makes everything easy to manage and we wouldn’t be without it.”