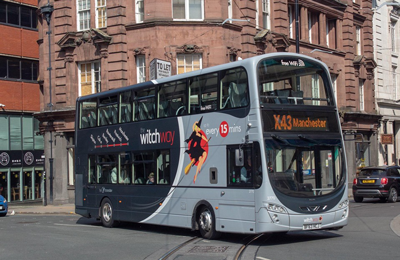 Transdev claims that a new ban on buses in Manchester city centre will mean vulnerable people who depend on its services are being denied access to key shops and facilities as a result.

Manchester City Council has introduced new measures on a section of Deansgate, between Blackfriars Street and King Street West in order to make it easier for people to socially distance.

As a result, Transdev’s Witchway express from Burnley and Rawtenstall, and its Red Express service from Accrington and Ramsbottom, have to take a diversion and no longer have direct access to bus stops on Deansgate.

Transdev CEO Alex Hornby says: “This change has made life much more difficult for those who need direct access to the heart of the city most of all – those who cannot walk the long distance to and from alternative stops on a long diversion route. It’s bad news for vulnerable people who depend on our buses as their only means of transport.

“Manchester City Council says that although the closure of this key section of Deansgate has been brought forward on a temporary basis, its aspiration is to make it permanent. That has serious implications for our customers who now face great difficulties in getting to the area, as not everyone can walk long distances to and from relocated bus stops where social distancing is not always achievable.

“A permanent closure with a lengthy and frequently congested diversion route will increase pollution as buses are delayed in traffic, while it also places the viability of bus services at risk due to the double whammy of higher costs for extra fuel and lower customer numbers choosing the bus to reach the city centre. That has got to be bad for everyone, whether they depend on the bus or not.”

Transdev estimates the cost of extra fuel needed to continue running both of its bus services around the diversion route at £100,000 a year.