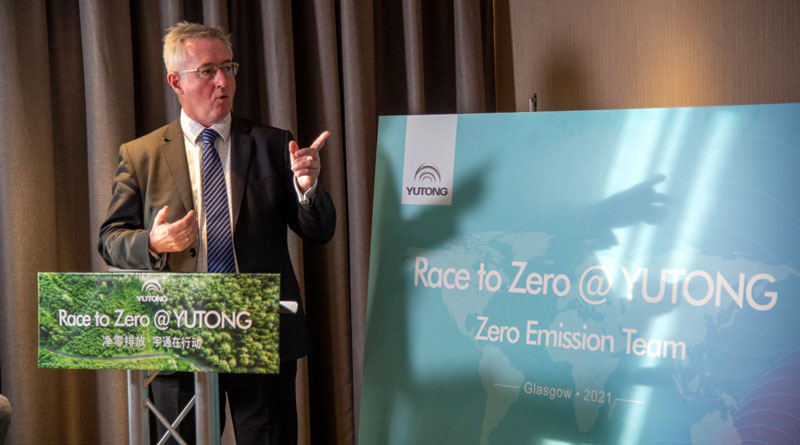 CPT put the focus firmly on zero emission coaches this month with a members’ zoom conference looking at the challenges for future ZE coaches coinciding with the announcement of a new industry coach decarbonisation taskforce, chaired by former CPT president Ian Luckett.

Some of the key messages emerging from the online conference included: hydrogen needs to be considered alongside battery electric vehicles, although the sourcing of ‘green hydrogen’ is critical; infrastructure has to be considered from the outset and ZE vehicles need to be developed holistically and not just derived from existing diesel models; and the UK government needs to overcome its blind spot towards coaches which are the only sector which has so far had no grant funding to support ZE vehicle development.

The conference featured presentations from manufacturers and suppliers as well as operators who have experience of integrating electric vehicles in the bus and private hire sectors.

Richard Ball, new vehicles director for National Express, set out the case for hydrogen fuel cell coaches. He reported that the group had trialled battery electric vehicles and concluded that while these may be a good fit on some routes, the majority of its network would benefit from the additional range and fast refuelling time that hydrogen can provide. Luggage capacity is also a key concern for National Express, with a standard requirement for around 10.5 cu m, whereas one of the BEV demos had around a third of this.

But hydrogen is not without its challenges of course. Ball pointed out that the likely storage space for hydrogen tanks is on the roof which raises issues for stability on tilt tests. But the biggest challenge may be infrastructure and the lack of hydrogen refuelling capacity has to be addressed. “There are not currently even enough [hydrogen] fuel stations to do a corridor, never mind a network,” said Ball.

One of the key reasons why coaches have lagged behind buses when it comes to decarbonisation  is because it is a much smaller market and therefore more difficult for manufacturers to get a return on the investment needed. Ball acknowledged this and called for an industry-wide effort to pool information on the specifications they would like to see for zero emission coaches and for the sector to consider more standardised vehicles to reduce the eventual cost.

Dan Hayes, Zemo Partnership presented a quick summary of the evolution of zero emission vehicles in the sector, and noted that the handful of electric coaches was related to the fact that coaches have never been fully understood by government and have been left out of all the funding schemes. “Most [coach] operators are still trying to get to Euro 6,” said Hayes.

There has been some specific support from Scotland’s funding for zero emission vehicles with Ember operating new Yutong electric coaches, although this was only available for vehicles running on registered routes, so not relevant to the tourism and leisure market.

Hayes suggested that coach operators could benefit by considering the purchase of even a single EV at an early stage, so they could start learning how they would integrate them into their operations.

Yutong is currently the only manufacturer offering a full electric coach in the UK and has its TCe12  in operation with Westway, Watts Way Travel and Ember. Ian Downie, head of Yutong Bus at UK distributor Pelican, reported that the TCe12 is available with a 281 or 350kWh battery providing a range of 240-280 miles. The current model can fit 50 seats but he pointed out that an increase in the permitted axle weight to 122.5t would allow up to 59 seats. Ember’s operation in Scotland is doing up to 1,000km a day with two to three charging periods during the day.

Yutong has established a Team Zero, bringing together operators with Yutong electric buses and coaches, plus other partners and he suggested that one of the outcomes could be the availability of coach charging facilities through this network of operators.

During the question session, there was a discussion about how clean hydrogen is in terms of carbon, and the difference between ‘green’ hydrogen produced using renewable energy sources, and what is known as ‘blue’ hydrogen which uses fossil fuel energy to provide the power for the electrolysis process. In response, Downie said firmly that while Yutong does have a hydrogen fuel cell coach in its line-up, it would not be sold in the UK without a commitment for it to be operated on ‘green’ hydrogen’.

CPT aims to continue its work on zero emission coaches through the new taskforce which will be working on a report to be published in the summer of 2022.

CPT chief executive Graham Vidler says: “CPT is launching this taskforce to help our members get ahead of what will be a transformational issue for the industry over the coming decades.

“The taskforce will start with a forensic examination of the issues ahead. This is a crucial first step in helping us develop sustainable and deliverable solutions which will help the industry on its journey to net zero.”

Chair of the taskforce Ian Luckett adds: “Decarbonising our world is essential and it’s vital our industry understands the part it needs to play on the journey to ‘net zero’. It must be clear not only about the challenges it faces, and what needs to happen to help it overcome them, but that it has evidence to back this up. I will be asking members of the taskforce to have this in mind from day one as we begin this exciting and important work.”