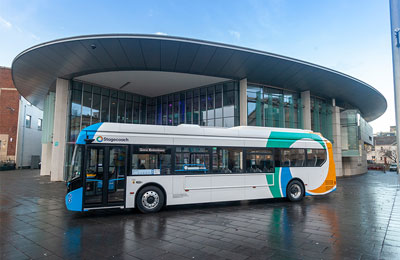 Stagecoach will be introducing all-electric city bus networks in Scotland as part of its drive to deliver a net zero UK bus fleet by 2035. Plans are underway to see Stagecoach’s city bus networks in Inverness and Perth all electric from the end of 2022 and early 2023 respectively. New e-buses will run across routes that have previously operated with largely diesel fleets, helping to drive cleaner air in these two major cities.

Stagecoach is introducing the £13.9million fleet of 38 new e-buses, partly funded by the Scottish Government, across Inverness and Perth through the Scottish Zero Emission Bus Challenge Fund (ScotZEB), designed to support the transition to zero-emission technologies as part of Scotland’s overall target to achieve net zero by 2045.

The new electric buses in Perth, which will be introduced in early 2023, will be made up of a £4.8million fleet of 13 buses, including seven single-deck, five midibuses and one double-deck. They will add to the fleet of nine zero emission buses  introduced in the city last December.

The £9.1million investment in Inverness will see a fleet of 25 new electric midibuses introduced from late 2022 across routes 1-9, replacing the city’s diesel bus fleet.

New zero emission buses are also being introduced over the coming months on Stagecoach networks across other areas in Scotland including Aberdeen, Ayr, Dunfermline, Kirkcaldy and Kilmarnock as part of the ScotZEB plans.

Over the past 14 months, Stagecoach has rolled out 52 new electric buses across its networks in Scotland as part of the Scottish Government’s Ultra Low Emission Bus Scheme (SULEBS), with a further six electric buses introduced across the west of Scotland in partnership with SP Energy Networks.

Minister for transport Jenny Gilruth says: “This latest announcement from Stagecoach is welcome, and is fantastic news for everyone who lives in, works and visits Inverness and Perth. Not only will these new buses help reduce transport emissions and respond to the climate emergency, they will improve local air quality too.”

Sam Greer, Stagecoach regional director for Scotland, adds: “One of the quickest ways local people can help deliver net zero is by switching from cars to buses, as well as walking and cycling more. We look forward to continuing to work in partnership with the Scottish Government and local transport authorities on measures to deliver more priority for bus passengers, more reliable services, simpler ticketing and the best value fares.”

The funding announced earlier this year as part of the ScotZEB initiative follows two rounds of funding under the predecessor Scottish Ultra-Low Emission Bus Scheme in September 2020 and March 2021.