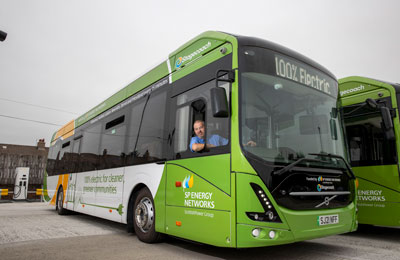 Stagecoach marked Scottish Climate Week with a plan to cut tens of thousands of tonnes of carbon emissions a year from its business as it targets a zero emissions bus fleet in the country by 2035. The company says that investment in clean technologies, including new electric buses, is expected to deliver an estimated annual reduction of around 67,000 tonnes of CO2e from its fleet of more than 1,200 buses in Scotland in less than 15 years.

According to Zero Waste Scotland, the average annual carbon footprint per person in Scotland is 13 tonnes of CO2e. This means Stagecoach’s plans are the equivalent of reducing the environmental impact of more than 5,000 Scots to zero.

The latest Stagecoach targets and commitments are part of the company’s new sustainability strategy Driving Net Zero: Better Places to Live and Work, published in advance of the COP26 climate change summit in Glasgow in November. Stagecoach is aiming to decarbonise its business by around 70 per cent by 2035 as well as targeting a zero emissions bus fleet across the UK by that date.

A £21.4million fleet of 46 new fully electric buses is being introduced by Stagecoach in Aberdeen, Perth and Kilmarnock this year as part of the Scottish Government’s Scottish Ultra Low Emission Bus scheme. It follows the UK’s first fleet of six fully electric buses serving rural communities which went into service earlier this summer under a partnership between Stagecoach and SP Energy Networks, connecting villages along the Irvine Valley with Kilmarnock town centre.

Separately, five Scottish Citylink coaches in east Scotland have been fitted with new solar panels which provide clean solar energy to power all on-board electrical equipment. This reduces the requirement to create electric energy via the burning of diesel, a move that is estimated to save up to 7,500 litres of fuel and over 20 tonnes of CO2.

Sam Greer, regional director for Stagecoach in Scotland, says: “There has never been a more important time to take action to address the climate emergency and play a part in helping Scotland deliver on its net zero ambitions.

“Making net zero a reality – and quickly – is about more than just switching technologies. We also need to change how we travel, moving people away from cars to walking, cycling and public transport.

“This needs strong and brave leadership from national and regional governments to create incentives to reward the right choices. We also need to make sure the country’s transport infrastructure is prioritised for people, such as bus passengers, who are contributing to a cleaner and healthier country.”