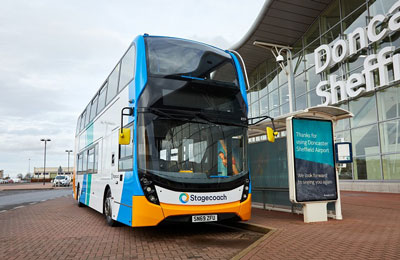 Stagecoach has called on the UK Government to use the forthcoming spending review to put in place a stimulus package to incentivise a return to Britain’s buses to help drive regional economies and deliver on the country’s net zero ambitions. Stagecoach has submitted a six-point plan including tax incentives, discounted fares and a national bus marketing campaign to match the recently-launched advertising push to attract consumers back to trains. The company has also called for reform of motoring tax and a government roadmap for investment to support decarbonisation of the bus sector and deliver 4,000 new promised electric buses in England.

The bus group has pointed to the latest Department for Transport data which shows that while car use has surged to as high as 111 per cent of pre-pandemic levels, bringing growing road congestion and pollution, bus use in both London and regions across the country has lagged behind.

Martin Griffiths, Stagecoach chief executive, says: “Bus networks are the arteries behind the social and economic heartbeat of Britain’s towns and cities. They are also central to delivering on the country’s net zero ambitions and creating healthier, more connected communities.

“Government messaging during 18-months of the pandemic has negatively impacted public perceptions of public transport and is holding back Britain’s buses. We need urgent government action and innovative policies to support the efforts of operators to re-boot bus use and unlock their power to kick-start the country’s recovery from the pandemic.”

Among the proposals is a ‘Back to Bus’ marketing campaign, run as a joint bus sector and government campaign to reaffirm the safety of the country’s bus network and counteract the negative impact of health messaging during the pandemic. Stagecoach proposes that it is fronted by senior government ministers and to utilise the significant communications resources in mayoral and other local authorities.

“Governments of all colours have for too long shied away from tackling the critical issue of growing and unsustainable car use,” adds Griffiths. “Current taxation policy is out of step with the strategy to deliver net zero. It has effectively made motoring cheaper, while the road congestion it causes has increased air pollution, accelerated the climate emergency and damaged public transport networks by making services more costly and less reliable.

“With the shift to electric vehicles, the country is also facing a significant black hole in public finances from declining fuel tax revenues. A new pay-per-mile regime for private cars, with measures to protect less well-connected rural areas and combined with other incentives, would help drive a return to public transport and more sustainable communities.”