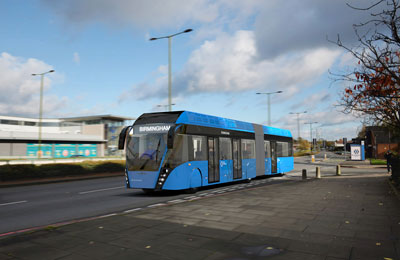 West Midlands Combined Authority is being asked to approve an £88million funding and delivery schedule for the new Sprint bus route which will will run an express zero-emission service along the A34 and A45 between Walsall and Birmingham Airport and Solihull to Walsall via the city centre. Transport for West Midlands says that commuters will also benefit from the introduction of priority signalling, extended bus lanes and a swift boarding experience to improve journey times and reliability across the route.

The proposed operator, to be announced in due course, has indicated it will cover the full cost of the vehicles, according to TWfM which adds that analysis predicts a return on investment to the Birmingham economy of at least £2.40 for every £1 spent on developing Sprint.

“The first phase of the Sprint scheme will see the introduction of a brand-new, cross-city service running in time to ferry thousands of visitors around the region for the Commonwealth Games,” says mayor of the West Midlands Andy Street “The scheme is also a key part of our transport revolution which is, after decades of under investment, delivering new bus, rail, Metro and cycle schemes to serve the people of the West Midlands for generations to come.”