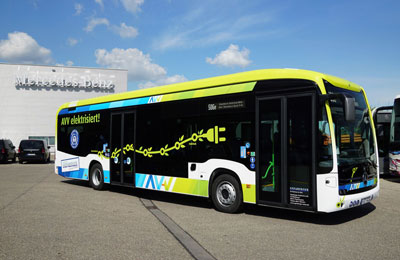 Two Mercedes-Benz eCitaro electric buses have covered a combined 200,000km for Egenberger bus company, saving more than 100 tonnes of CO2 emissions over one year of operation on the 506e line of the Augsburger Verkehrs-und Tarifverbund (AVV) public transport network.

Mirko Sgodda, head of sales, marketing and customer services, Daimler Buses: “Together with our long-term customer and partner Egenberger, we are extremely pleased about the very good performance of the eCitaro, in particular as it is used on a 20km-long regional bus route. This represents a further major step in the changeover of public transport to eMobility.”

The two regular-service buses are used on a 20-km-long regional bus route with 21 bus stops including the terminus stops at Augsburg’s University Hospital with its university campus and the Zusmarshausen school centre. The batteries of each bus have a capacity of 292kWh which get charged both at the terminus stops as well as by means of intermediate charging along the route.

Subsidised by the German federal government and the State of Bavaria, this project is limited in time until 2026. The eCitaro buses are used in alternation with a Citaro hybrid, and the latter not only covers the slightly longer 506 line which follows an almost identical route, but also serves as the basis for comparison.

The Egenberger bus company is third generation family-run company in Augsburg and also operates tourist travel and a bus rental service. The majority of the fleet of more than 70 buses are Mercedes-Benz vehicles.