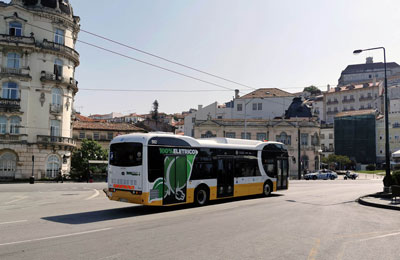 BYD has made a second delivery of electric buses to the Coimbra Municipal Urban Transport Service (SMTUC) in Portugal. A further five 12m BYD eBuses were handed over to the Portuguese PTO last month.

SMTUC first added eight electric BYD eBuses to its fleet in 2019, which at the time, were the first full-sized electric buses to be introduced to its fleet. The eight BYD eBuses have driven in excess of 700,000km, saving more than 760,000kg CO2 emissions.

Coimbra is one of Portugal’s oldest cities dating back to Roman times, with many buildings and monuments of historical importance. The bus routes are notoriously challenging for vehicles in a city that relies on an efficient network of public transport services. BYD eBuses are proving an ideal zero-emission solution on a practical level, while also protecting the historic environment and improving the air quality for the people who live, work and visit the city.

BYD has delivered more than 70,000 eBuses to customers worldwide, efficiently operating in both hot and cold climates. Over 2,500 BYD eBuses are delivered or on order in Europe, and in service in 100 European cities across 20 countries, including a growing number in the Iberian peninsula. Collectively they have driven over 150 million kilometres, which represents a saving of 160,000 tonnes of CO2 emissions.

Joaquin Bellido, eBus director Iberia, BYD Europe, says: “We are delighted to make a second delivery to SMTUC. It is gratifying to know that BYD eBuses are being so well-received by the Municipality of Coimbra, demonstrating that electric mobility is a practical and reliable solution for clean, emission-free public transport.

“SMTUC is setting an excellent example to other PTOs in Portugal and Iberia as a whole at such a critical time for tackling climate change.”