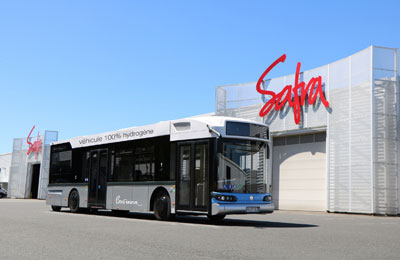 The Businova hydrogen buses are already operating in cities such as Artois-Gohelle, Versailles and Le Mans, and the two companies have announced plans to build up to 1,500 12m buses with deliveries from December 2021. “Safra is currently the only French manufacturer making hydrogen buses”, says Vincent Lemaire, CEO, Safra.

The buses will be equipped with Symbio’s plug-and-play solution, which has been designed specifically to meet the needs of this market. Symbio’s unit contains a 45kW fuel cell which it claims is ready for mass production and will offer a significant cost advantage. The unit also includes a compressor and power converter that have been pre-approved to optimise system performance while their integration is designed to meet the specific needs of these vehicles.

Safra has invested to double the size of its manufacturing facility in order to significantly reduce manufacturing time and cost.

“We have launched a first phase to accelerate our rate of production, which sees an expansion to our production tooling in terms of materials, technology and human resources,” adds Lemaire.

“This first step will allow us to quickly produce 140 buses per year. The next stage will be even more ambitious, as we plan to invest a total of €100million over 10 years to produce more and faster in order to generate a significant reduction in costs.”

Symbio has begun construction of what it claims will be Europe’s largest fuel cell plant in Sain Fons, France, where it will eventually produce 60,000 systems per year. “We have a clear roadmap to accelerate both innovation and production”, says Philippe Rosier, CEO Symbio.