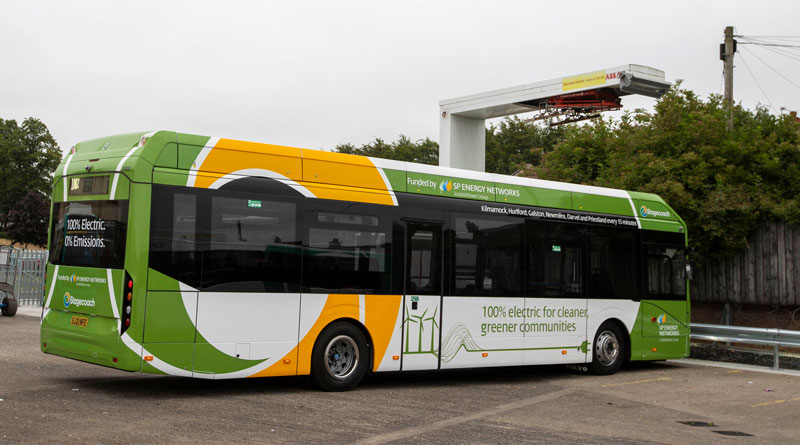 The UK’s first fleet of six full electric buses serving rural communities has been launched by SP Energy Networks and Stagecoach West Scotland. Five of the six new Volvo 7900e electric buses were funded by £2million from SP Energy Networks’ £20million Green Economy Fund and will operate on a Stagecoach West Scotland route connecting villages along the Irvine Valley with Kilmarnock town centre. Due to the length of the rural bus route, this project will be the first in Scotland to introduce opportunity charging where buses are recharged on-route, rather than charging overnight using Scotland’s first ‘pantograph’ charging point at Kilmarnock bus station.

Stagecoach West Scotland’s new zero-emission buses are estimated to save around 680tonnes of CO2 emissions annually. Using 300kW opportunity charging, a full day’s service with a daily distance of up to 270 miles will be covered per vehicle.

Frank Mitchell, CEO, SP Energy Networks, says: “As Scotland continues to restart its economy and create jobs, we want to ensure East Ayrshire remains on track to becoming one of Scotland’s cleanest, greenest and most climate-resilient regions.

“Stagecoach’s six electric buses and charging hub are key to delivering electric transport in the region. Using the innovative work taking place in Kilmarnock as a blueprint for the first zero-emissions buses serving rural communities, we can work together to build a healthier and greener Scotland, as well as enhancing the public transport experience for local people.”

Fiona Doherty, managing director, Stagecoach West Scotland, says: “Traditionally electric buses have only ever been used on urban routes and this is a fantastic opportunity for Stagecoach and its partners to show that fully electric vehicles can be used across more challenging, non-urban routes.

“The introduction of the new opportunity charge buses across Kilmarnock further cements our commitment to meet the requirements of the Scottish Government and East Ayrshire Council’s climate change strategies. There is no other comparable project in the UK with other electric vehicle routes either on urban or low mileage rural routes.”