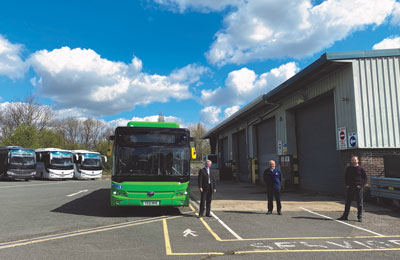 With an increasing demand for UK parts and labour content in Yutong zero emission buses, Pelican Bus & Coach has reached a co-operation agreement with Yutong to be officially recognised as a final assembly plant on behalf of Yutong in the UK.

Vehicles will be delivered to Pelican for final completion. Items such as driver seats, passenger seats, fire suppression, stanchions, bell pushes, USB chargers, destination equipment’s, wi-fi, radio, CCTV, passenger information systems and any other customer-specific items will now be fitted at Pelican. In addition, vehicle and battery systems are commissioned locally alongside a pre-delivery inspection.

Pelican also conducts driver and engineer training at either customer’s premises or at Pelican resulting in local labour being up-skilled with the latest technology.

To accommodate the new operation, Pelican has purchased the former Ryder Trucks depot in Castleford and plans to refurbish and extend this property to suit. The 170 employees at Pelican will also be increased to reflect ongoing business growth.

Ian Downie, head of Yutong Bus UK, says: “The continued success of the Pelican brand in the UK with Yutong has been reflected in this agreement. Increased UK content, with local employment based not only in Castleford but also around the UK, reflects both the demands of our customers and our growing success in zero emission buses and coaches.

“It also benefits our coach customers who have been the bedrock of our business and we currently carrying out PVSAR conversions at Castleford. Our vehicles now have a much greater level of UK-sourced equipment being fitted in the UK. As more and more zero-emission vehicles enter service, this provides more local employment to our suppliers and also to civil and electrical contractors as the supporting infrastructure is built and commissioned.”

Richard Crump, managing director, Pelican, adds: “Pelican is a UK company with a 102 year history of customer support. Our shareholding is 100 per cent contained in the UK and we are proud to be supplying state-of-the-art vehicles that allow local communities to benefit from zero emission transport on their streets. The £2million investment in new premises, staff and parts demonstrates our continued commitment to the UK economy and our local area.”