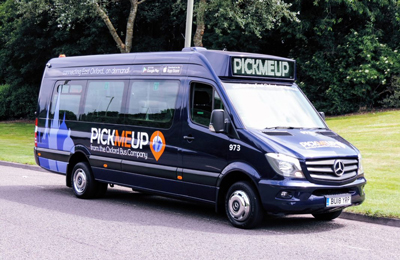 Oxford Bus Company is withdrawing its PickMeUp service next month at the end of a two-year pilot scheme. The company says it has worked hard to establish the service and has exhausted all external funding avenues to make it viable. It points to congestion slowing down buses to 9mph as one of the reasons passenger numbers did not reach their target, and a lack of ongoing support from local authorities and businesses.

PickMeUp was launched in June 2018 as the largest service of its kind in the UK to improve connectivity in the eastern arc of Oxford by complementing traditional bus routes. It enabled passengers in eastern Oxford to summon buses to pick them up on a street corner of their choice, to go to a bespoke destination. More than 38,000 people downloaded the app and more than 300,000 journeys were made on the service.

Phil Southall, Oxford Bus Company managing director says: “Unfortunately despite exploring every funding avenue available we have not been able to secure the financial support required to maintain the service.

“We would like to thank everyone who has travelled with the PickMeUp service and our superb colleagues who have worked with us throughout the pilot scheme. It is no reflection on their hard work that we have had to finish operating the service.

“PickMeUp was a great innovation by Oxford Bus Company, but unfortunately, we were left with no choice but to withdraw the service due to unsustainable losses and not enough support coming forward.”

Oxford Bus says that parent company Go Ahead Group is looking to introduce the concept in other areas of the country where it may prove to be more viable.

“We believe with the right support a ride sharing service can be part of the solution to reducing congestion, but at this stage it has not been successful in Oxford,” adds Southall. “This may change in the future if congestion management measures are introduced and a Workplace Parking Levy could top up the funding required to make it work and reduce congestion so that more demand can be satisfied.”