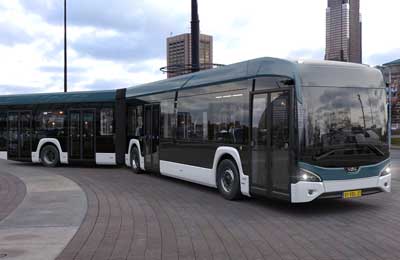 VDL is preparing to launch its new generation Citeas at an event in November, having originally intended to coincide the launch at Busworld 2021. As the show is now cancelled, VDL says it will proceed with its own event which will feature two types of vehicles: the LF-122 and LF-181 (both Low Floor). The new Citea product also includes the LE-122, LE-135 and LE-149 (all Low Entry).

VDL says the introduction of the new generation of Citeas is its response to the challenges of tomorrow’s public transport.

“Whereas in recent years ‘Aiming for Zero’ was the ambition, zero emissions is now the norm for the liveable city. This requires new technologies and a different way of thinking. VDL’s new Citea bus concept offers solutions without compromise.

“It is now widely accepted that electric public transport is the new standard, with huge benefits for cities, people and environment.”

VDL Bus & Coach is shifting its claim from ‘Aiming for Zero’ to ‘Zero Compromise’, Jacobs adds: “It is a reference both to zero emissions and to the fact that, with the new generation of Citeas, we don’t have to make any compromises or concessions in achieving the zero emissions targets, together with all stakeholders involved in this process.”

The new generation of Citeas has an all-electric drive train. The battery packs are integrated into the floor, creating more passenger space and lowering the bus’ centre of gravity, resulting in more stable road handling.

And for this new generation of electric city buses, VDL Bus & Coach has developed a composite sidewall that consists of a single piece. This causes less vibration, reduces noise pollution and has a good insulation value, which ultimately contributes to passenger comfort.

Alex de Jong, business manager public transport, adds: “In the past decade, we have become the frontrunner in Europe in the field of e-mobility, with more than 100 million electric kilometres of experience. While others were still talking about it, we started working on the first electric Citea in 2013.”