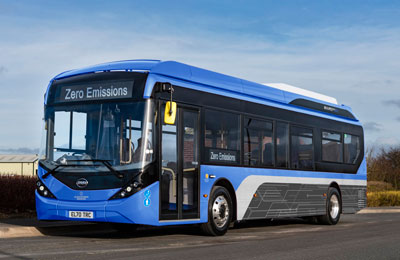 Coinciding with the hosting of COP26 in Glasgow, NFI Group has reported that its electric vehicles have collectively travelled more than 50 million zero-emission miles, preventing nearly 140,000 imperial tons of greenhouse gas emissions – the equivalent of removing almost 30,000 cars from the road for one year. The 50 million milestone comes six months after it reached the 40 million zero-emission mark.

“As we lead up to COP26, we remain cognisant of the need to limit global warming, which demands significant reduction of greenhouse gas emissions over the next decade,” says Paul Soubry, president and chief executive officer, NFI. “There has never been more urgency for the design and delivery of mobility solutions that are clean, safe, accessible, efficient, and reliable.”

NFI subsidiary Alexander Dennis’ zero-emission, double-deck bus is on display in the COP26 Blue Zone in Glasgow. And NFI will showcase its first full electric line-up of buses and coaches at the American Public Transit Association’s (APTA) event this month.

“NFI exists to move people, and we do just that – moving millions of people around the world, each and every day,” adds Soubry. “Today, we are leading the electrification of transit operations in multiple markets, including Canada, the United States, the United Kingdom and New Zealand. In just six months, our electric vehicles have collectively completed over 10 million zero-emission miles, bringing our lifetime total to over 50 million electric service miles. This is a huge milestone for NFI, and for the environment, and it is also proof that the transition to zero-emission is accelerating.”

NFI has been manufacturing electric vehicles since 1969, and its current offering includes both battery-electric and fuel cell-electric buses and coaches.