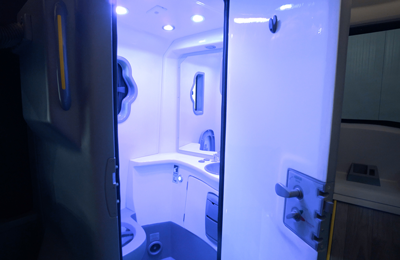 The use of UVC ultraviolet radiation in bus toilets is being used by Marcopolo to promote biosafety in public transport.

Rodrigo Pikussa, Marcopolo director, bus business, says: “Our actions, since the beginning of the pandemic, were based primarily on protecting people, both our collaborators and the communities where we operate. Now, with our biosafety initiatives on board, we take an additional step to protect users of our products and allow society to return to its activities, as close to normal as possible.”

The new system received approval from the Clinical Microbiology Laboratory at Universidade de Caxias do Sul, and claims an efficiency greater than 99.99 per cent in anti-microbial action. The technical report is available for access at https://bit.ly/EficaciaAntimicrobiana.

Luciano Resner, Marcopolo engineering director, adds: “The only thing that needs to be assessed by our technical team is to ensure that safety devices and passenger detection are present. UVC is extremely efficient in this application, but at the same time it is harmful to health, which is why its use must be restricted to closed spaces, without passengers being directly exposed to the light.”

The new system is now available to customers and can be installed both in vehicles in production and in units already in circulation on the market and will be sold as a kit, for all Marcopolo, Neobus and Volare vehicles.

The system consists of a set of ultraviolet lights which are automatically activated after the restroom is used or in automatic cycles during the use of the bus.

UVC radiation eliminates viruses, bacteria and other microorganisms because it can penetrate the cells of these pathogens and their genetic structure. Marcopolo says there is also evidence that ultraviolet rays can damage the amino acids and proteins that protect the virus or allow it to bind and infect a host cell.