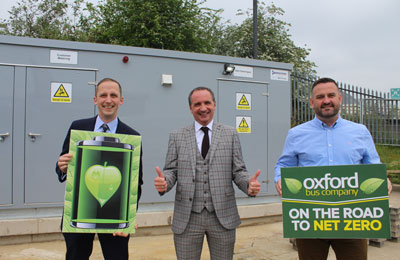 Oxford Bus Company has completed a major milestone in its project to roll out a fleet of electric buses for Oxford with the installation of a substation at its Cowley depot. The substation, which will provide 8MW of power to support rapid charging of vehicles, is connected to a cable which runs into a large 60MW battery that is sited at the Cowley substation and connected direct to the National Grid.

In the future, Oxford Bus Company is looking to install 104 charging posts and connecting them to the substation to charge the new electric buses. The company says the move represents the next phase in the company’s continued journey towards a low carbon future.

The new substation was installed by Pivot Power and makes up part of the Oxford Energy Superhub project which will be used to help balance grid demand to assist the transition to renewable energy sources. It will also power a high-power private wire charging network that will support a large number of ground source heat pumps in the city, and supply power to the bus depot and an EV charging hub at Redbridge Park & Ride, to enable large scale EV charging at the Park & Ride site.

The development follows a successful bid for funding to support the introduction of 159 electric buses to serve Oxford. Oxford Bus Company, Thames Travel, City Sightseeing Oxford and Stagecoach have pledged £43.7million towards the Zero Emission Bus Regional Areas (ZEBRA) scheme. The government has committed £32.8million and Oxfordshire County Council £6million. The commitment from bus operators is dependent on the introduction of public policies to reduce bus journey times.

“We are grateful to the longstanding partnership we have with Pivot Power and the Energy Superhub Oxford project, which has helped us deliver the substation. It is a key step in our exciting electric transformation journey. The next crucial step to make a fleet transition financially viable is to speed up bus journey times by 10 per cent, measures to achieve which will be consulted on in the summer.”

In 2020 Oxford Bus Company introduced the first electric bus to Oxford via its City Sightseeing Oxford fleet. It now has three retrofitted electric vehicles in its fleet, which were delivered in partnership with Oxford City Council. The electric buses are charged at the Cowley depot, via its depot energy circuit, which also includes solar panels.