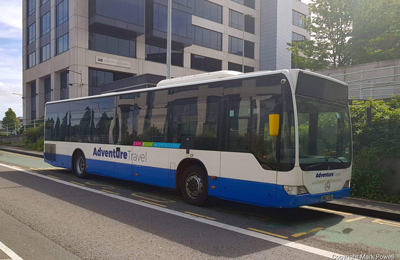 NAT Group, in partnership with TrawsCymru and Monmouthshire Council, has unveiled plans to continue the ‘Severn Express’ bus route, which is an existing bus route that operates between Chepstow and Bristol via Cribbs Causeway and Clifton.

The route was originally operated by First Group and then Stagecoach but had been terminated until, NAT Group, TrawsCymru and Monmouthshire Council, stepped in to take over the operation, rebranding it ‘TrawsHafren’ (across the Severn).

NAT Group started operation of TrawsHafren on 15 June as Stagecoach left the route to ensure no gap in service. The route will operate via Cribbs Causeway and will enter Bristol via Clifton, which is believed to be the best possible route to avoid adverse congestion, and therefore reducing travel time.

The route will initially operate on a six-month pilot scheme.

Amongst the changes for the new service will be a new dedicated app which will enable pre-booking, live vehicle tracking and advance cashless payment.

“This is a great example of operator, local authority and Welsh Government working together for the good of the travelling public,” says NAT Group managing director Adam Keen. “I am sure that with the new technology, the dedicated drivers and the revised timetable, this route now has the very best possible chance of success.”