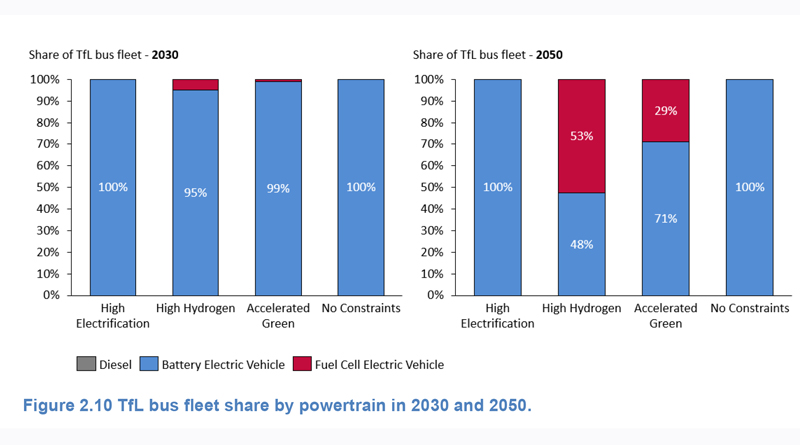 A new report published by Element Energy and commissioned by the mayor of London, sets out the scale of the action required to move London towards a greener future and net-zero carbon emissions by 2030. The new analysis shows that more action will be required, particularly around reducing vehicle use in London, but that the mayor does not have the funding or powers to deliver everything that is required.

In order to reduce transport emissions by anywhere close to the amount required to clean up London’s air, achieve net-zero by 2030 and cut congestion, the report finds that the capital will have to see a significant shift away from petrol and diesel vehicle use and towards walking and cycling, greater public transport use and cleaner vehicles. At the moment, just two per cent of vehicles on the roads in London are electric.

Mayor of London, Sadiq Khan, says: “This new report must act as a stark wake-up call for the Government on the need to provide much greater support to reduce carbon emissions in London. It’s clear the scale of the challenge means we can’t do everything alone.

“But I’m not willing to stand by and wait when there’s more we can do in London that could make a big difference. We have too often seen measures to tackle air pollution and the climate emergency delayed around the world because it’s viewed as being too hard or politically inconvenient, but I’m not willing to put off action we have the ability to implement here in London.

“I’m determined that we continue to be doers, not delayers – not only to protect Londoners’ health right now, but for the sake of future generations to come.”

The capital has seen a shift to driving during the pandemic with the cost of congestion rising to over £5 billion last year, leading to gridlocked roads and toxic air pollution. The number of miles being driven in the capital has increased in recent years, despite statistics showing that more than a third of car trips in London could be made in under 25 minutes by walking, and that two-thirds could be cycled in less than 20 minutes.

The report sets out that to achieve anywhere near a 27 per cent reduction in car vehicle kilometres, London will need a new kind of road user charging system implemented by the end of the decade at the latest. Such a system could abolish all existing road user charges – such as the Congestion Charge and ULEZ – and replace them with a simple and fair scheme where drivers pay per mile, with different rates depending on how polluting vehicles are, the level of congestion in the area and access to public transport.

The potential approaches under consideration are:

• Extending the Ultra Low Emission Zone (ULEZ) even further to tackle more of the dirtiest vehicles: extending the current zone beyond the north and south circular roads to cover the whole of Greater London, using the current charge level and emissions standards.

• Modifying the ULEZ to make it even more impactful in reducing emissions: building on the existing scheme by extending it to cover the whole of Greater London and adding a small clean air charge for all but the cleanest vehicles.

• A small clean air charge: a low-level daily charge across all of Greater London for all but the cleanest vehicles to nudge behaviour and reduce the number of short journeys by car

• Introducing a Greater London boundary charge, which would charge a small fee to non-London registered vehicles entering Greater London, responding to the increase in cars from outside London travelling into the city seen in recent years.

The Mayor and TfL will now begin a period of consultation with Londoners, local government and businesses. Subject to consultation and feasibility, the chosen scheme would be implemented by May 2024.