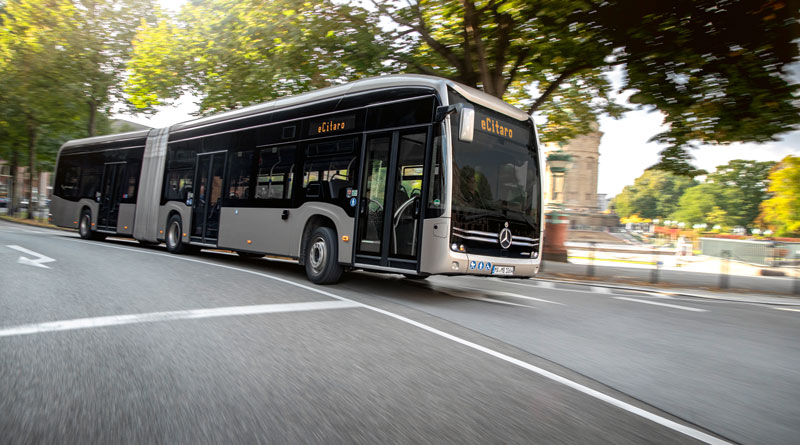 Daimler Buses says it is aiming to offer “locally CO2-neutral” vehicles based on batteries and hydrogen in every segment by 2030 with an initial focus on core markets in Europe and Latin America. By 2039, Daimler says only locally CO2-neutral new vehicles are to be sold in the core market of Europe, and this will be achieved by 2030 in Europe.

It plans to launch its first all-electric intercity bus from 2025 and coaches with hydrogen fuel cell drives from the end of this decade.

Daimler’s careful use of the term “locally CO2-neutral”  signifies an acknowledgement of the fact that such technologies may have carbon emissions associated elsewhere, particularly so in the case of hydrogen if it is sourced from blue hydrogen (non renewable) sources.

Till Oberwörder, head of Daimler Buses, says: “As a worldwide leading bus manufacturer, our ambition is clear: We want to make a contribution to contending climate change and be a driver of the change in transportation that is needed to achieve this.

“We will only offer CO2-neutral new vehicles in the city bus segment in Europe and will not invest in Euro VII technology. We are focusing our development efforts entirely on the zero-emission and fully electrically powered eCitaro.

“Our goal is for electro mobility to become an everyday reality in the bus business.”

From 2023, Daimler Buses will also equip its previously purely battery-electric Mercedes-Benz eCitaro city bus, which has been in series production since 2018, with a hydrogen-based fuel cell as a range extender, giving it a range of up to 400km.

In addition, Daimler Buses will offer the eCitaro with a new generation of high-performance batteries from the end of 2022 which increase the capacity per battery cell by around 50 per cent for the same weight and enable reliable ranges of around 280km. The new batteries will be used in both the eCitaro, the eCitaro Range Extender and the recently launched all-electric chassis eO500U from Brazil.

Daimler reports that more than 600 eCitaro are now in daily use by European customers.

The  eO500U  battery-electric bus chassis is being developed for Latin America and the Oceania region and will be manufactured at the São Bernardo do Campo site in Brazil and is largely based on the technology of the eCitaro. The electric chassis will offer a range of around 250km.  Daimler Buses has already taken 100 orders for the chassis in its main Latin American market of Brazil. Delivery is scheduled for between the end of 2022 and the beginning of 2023.
www.daimlertruck.com