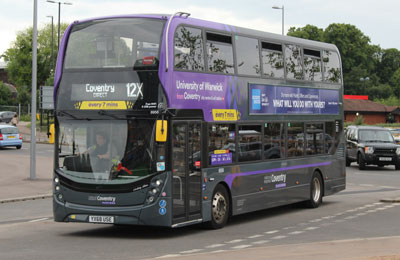 National Express is preparing an all-share bid for Stagecoach said to value the latter at £445million. The proposed deal would create a business with a fleet of 36,000 buses and coaches which National Express says would deliver “significant growth and cost synergies”.

Stagecoach shareholders would receive 0.36 new National Express shares for each Stagecoach share they own, giving them 25 per cent of the combined group.

Stagecoach has 8,400 buses and coaches in the UK. National Express has a smaller UK bus fleet, but has an overall fleet of 28,000 vehicles, operating across the UK and in Spain, and school buses in the USA. It also has a German rail contract.

It is proposed that Ray O’Toole would become chair of the combined group, while Jorge Cosmen would be deputy chair, and Ignacio Garat and Chris Davies would be CEO and CFO respectively.

National Express is well known for its extensive coach network in the UK, operated both with its own fleet plus those run by contracted operators. It employs 48,000 people, of whom 6,800 are in the UK, while Stagecoach has a UK workforce of 24,000.

National Express acknowledged that a deal would lead to job losses in head office and back office functions, although it said this would only affect a “small percentage” of staff, and drivers would not be affected.

National Express has identified pre-tax cost savings of at least £35million, as it could use Stagecoach’s depot network for its coach operations, which presumably could lead to a switch to more directly-operated services and fewer contractors.

Any deal would be subject to approval by UK competition authorities. While the bus networks of both groups have little overlap in the UK, there are competing coach routes. Of course, the impending changes to bus regulation including proposed franchising systems for Manchester and other cities mean that the reach of any network may depend on contract wins in the future.