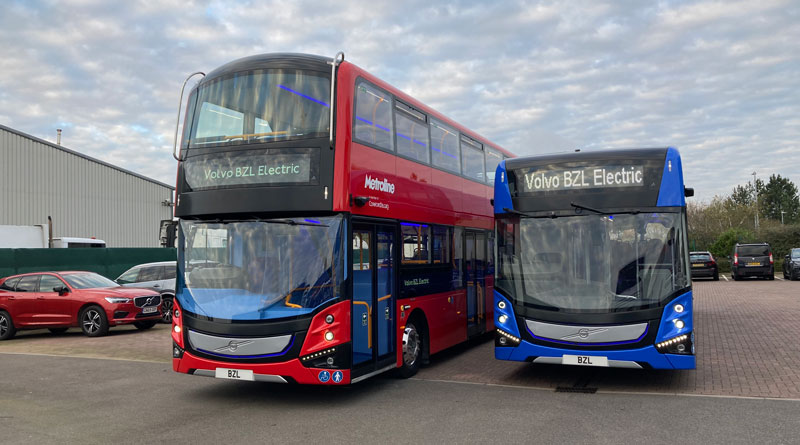 Volvo launched its new BZL electric chassis to customers and media in a series of presentations at its UK base in Coventry. The new BZL will be available as a single-deck at lengths of 9-13m, and in double-deck format at 10.3 and 10.9m. The electric double-deck launch is the most significant since Volvo has had its 7900e single-deck available for some time and already has 21 in service in the UK.

The first double-deck to operate in the UK will be a TfL-specification model which will be a fleet seed vehicle with Metroline for 12 months after completing its final testing, preparation and homologation. A second demonstrator is being prepared in a provincial specification.

The first single-deck BZL will operate on the Kent Fastrack as a seed vehicle. Both models have a new body developed by MCV in close cooperation with Volvo and which features an industry first – a CO2 heat pump  with a coefficient of performance ratio of 1:4, meaning it produces 4kW of energy from1kW input.

The London double-deck demonstrator has an 84-passenger capacity, although Volvo Bus UK & Ireland sales director Phil Owen believes that once the production vehicles arrive, this should reach 87 passengers.

The core driveline of the BZL has been derived from the 9700e model. It features a 200kW electric motor and 94kW batteries – the double-deck is likely to have five batteries giving it 470kWh energy storage. The batteries can be recharged in the depot by CCS connection, or configured for opportunity charging if required.

“The long established and ever more relevant Volvo core values of quality, safety and environmental care are at the heart of shaping a safer, cleaner and more efficient transport in the future,” says Owen. “They are woven into every aspect of the new Volvo BZL Electric and we are extremely excited to be able to introduce this new chassis platform to the UK and Ireland.”

It is 12 years since the first Volvo hybrid double-decks went into service and three years since its electric single-deck 7900e, and it could be argued that Volvo is later than expected in the race to electrification of the double-deck – a keystone vehicle for the UK market – especially since Volvo has been promoting ‘Electromobility’ for some years. But Owen appears relaxed about not being first to market. He suggests there can be advantages in following, and points out that there have been challenges for all manufacturers in meeting London operators’ requirement for a double-deck with at least a 150-mile range.

No orders have yet been announced, but production of the BZL is due to start in week 21 next year with deliveries likely to start in quarter four.

“I am delighted to be able to celebrate this important milestone in Volvo’s electromobility journey with colleagues and friends in the industry,” says Page. “Although my personal journey with Volvo is drawing to a close, the new Volvo BZL Electric – together with the requisite technology, services and support from the global Volvo organisation to deliver successful operation of electric vehicles – will prove to be the route forward for many operators on their on-going journey towards net zero.”