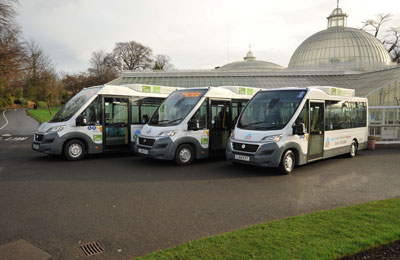 Mellor has supplied five Orion E full-electric, low-floor minibuses to Community Transport Glasgow as part of a strategy to move to a fully electric fleet, and in line with Glasgow city council’s ambition to become the UK’s first city to become fully carbon neutral.

CTG is a charity which provides accessible, door-to-door transport to vulnerable individuals and groups throughout the city, transporting 75,000 passengers each year.

The Mellor Orion E was first launched in 2017, with an enhanced model introduced last year.

It is the first full electric completely low-floor small bus designed to operate effectively in both the commercial bus market and areas such as dial-a-ride and demand-response services.

“We decided two years ago that the time had come to take the plunge and start integrating electric vehicles into our fleet with a view to being all electric by the end of 2020,” says Graham Dunn, Community Transport Glasgow. “At the time, our fleet was made of old diesel minibuses, some with more than 300,000 miles on the clock and with the advent of the Glasgow low emission zone, we needed to take action. We sought funding which was provided from Scottish Power Energy Network through the Green Economy Fund to initiate the change.”

The Orion E’s 96kW 6-phase motor delivers a peak torque value of 5,000Nm to the front wheel drive system which has improved hill climbing capability to 25 per cent at up to 5,000 kg GVW.