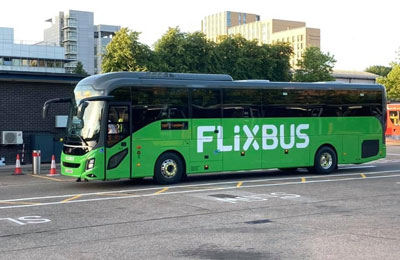 FlixBus is expanding its UK services to ten new destinations, including its first two stops in Scotland. The company now has more than 60 routes across 36 cities in the UK and the latest expansion takes in Bath, Chesterfield, Chippenham, Coventry, Edinburgh, Glasgow, Leamington Spa, Newcastle, Reading and Sunderland.

The London-Scotland route is a new addition to the FlixBus network and will be operated by McGill’s, based in the west of Scotland.

Andreas Schorling, managing director FlixBus UK, says: “We’ve had a fantastic start of operations and have really enjoyed enabling people to travel again in these last three months. This is a great time for people in the UK to discover their own country and do so sustainably travelling by coach. Our new offer includes even more cities, and our modern coaches serve the existing destinations more frequently. We are especially excited to travel even further afield and expand to Scotland.”

James Easdale, chairman, McGill’s Group, adds: “We are delighted to be entering into partnership with FlixBus to deliver their very first route from Scotland down to London. This is McGill’s first move into long-distance bus travel and we have assembled a team of highly experienced long distance express drivers and invested substantially in new Volvo 9700 coaches for the service.

“FlixBus is a huge brand that is synonymous with intercity bus travel in Europe and the United States and everyone at McGill’s is looking forward to working to build their presence in Scotland and the rest of the UK.”

McGill’s has taken delivery of two Volvo 9700 PSVAR coaches to operate the new express services. The delivery is the first UK sale of the new 9700 for Volvo Bus UK.

“The last time I operated high quality long haul coaches between Scotland, London and Europe, it was exclusively on Volvo chassis,” says Ralph Roberts, CEO, McGill’s Group. “That was a very successful experience and I look forward to this being the same.”