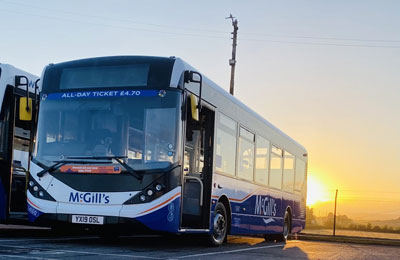 A £17.5million investment in electric buses has been announced by McGill’s, the UK’s largest independent bus operator. A total of 35 buses have been ordered by the company, comprising 23 electric single-deck buses for McGill’s Johnstone to Glasgow route, as well as 12 electric double-deck buses for Xplore Dundee which was acquired by McGill’s from National Express in December.

ADL will supply the 12 double-deck Enviro400EVs and one Enviro200EV single-deck bus, while Pelican Yutong will supply 22 Yutong E12 buses.

As part of their investment into the cleanest transport technology, McGill’s will also install new electrical charging infrastructure for its depots in Johnstone and Dundee.

The electric buses and infrastructure, which will be delivered in the second half of this year, ahead of the COP26 conference which takes place in Glasgow, is supported by the Scottish Ultra Low Emission Bus Scheme.

McGill’s also announced that it is in advanced talks with a variety of partners to bring 12 hydrogen buses into the business in the next 12 months.

The new fleet purchase takes McGill’s capital investment since 2014 to more than £50million – around £40million of which has been spent on new vehicles.

Ralph Roberts, chief executive, McGill’s Group, says: “McGill’s is recognised for the exceptionally high standard of its fleet and we’re delighted to be making this new investment into electric vehicles. We led the charge on introducing clean diesel Euro VI fleet and by the end of 2021, the McGill’s Group will operate more electric buses than any other operator in Scotland.”