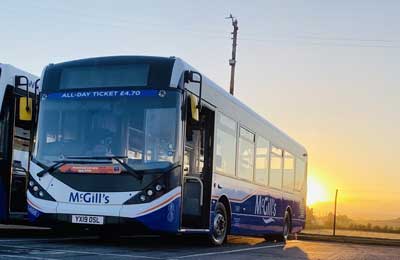 National Express has sold its Dundee operation to Greenock-based McGill’s Buses. As a result of the deal, McGill’s, owned by Sandy and James Easdale, will operate up to 850 buses, and have 1,200 employees with a turnover of £60million. McGill’s Buses says the deal makes it the biggest independent bus operator in the UK.

The Dundee business trades as Xplore Dundee brand for bus travel and Xplore More for coach travel. There are 350 employees and a fleet of 120 buses.

The business turnover is more than £18million and is based at the East Dock Street site that it has occupied since being owned by the council.

Ralph Roberts, CEO of McGill’s Buses, said: “We are purchasing the shares of the company and all activities will carry on as normal.”

Roberts adds that there are no immediate plans to change the branding of the buses.”

McGill’s Buses has grown rapidly during the past decade following its purchase of Arriva Scotland West in March 2012.

McGill’s chairman James Easdale says: “The Xplore acquisition is a perfect fit for us. Whilst others are shying away from investment, we are always looking for new opportunities in both construction and transport.”