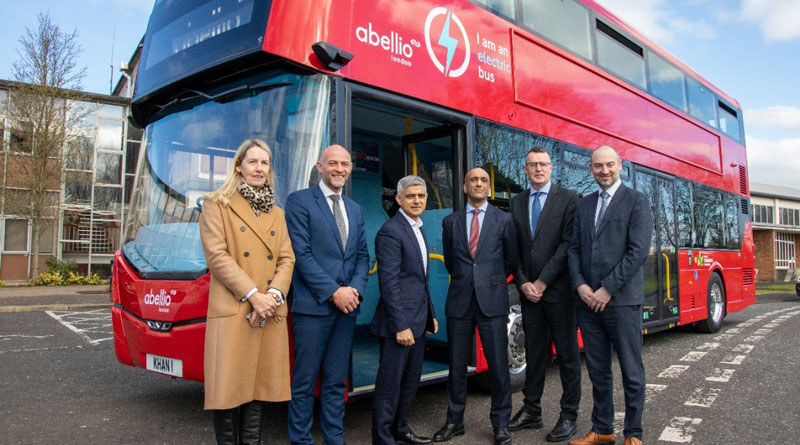 Mayor of London Sadiq Khan has urged the UK Government to provide longer-term capital funding to Transport for London to support tens of thousands of jobs across the country. He visited Wrightbus’ Ballymena factory to see the production of new electric double-deck buses which are scheduled to go into operation in London in October on route 111, linking Kingston to Heathrow. Khan warned that thousands of jobs around the UK are linked to major transport projects in London and could be at risk if TfL does not get the longer-term funding it needs.

Khan said: “Londoners will soon see the all-electric buses built at this Ballymena factory on the capital’s roads, adding to our ever increasing zero-emissions bus fleet and illustrating how investment in our capital can support innovation and jobs in green technology across the country.

“This is a prime example of how TfL’s supply chain stretches throughout the UK, supporting jobs, capacity and certainty for the national move towards a zero emission bus market, helping to clean up our filthy air.

“Each new electric bus operating on the streets of London and other UK cities also means less reliance on fossil fuels.

“However, as it stands the Government’s short-term funding deals are trapping TfL on life support and putting innovation, economic growth and jobs like this at risk, as well as slowing our efforts to improve energy security. I urge the Government to engage with TfL and City Hall in good faith over the next few months so that we can finally agree a fair, longer-term funding deal that will protect London’s transport network – for the sake of the capital and the whole country.”

The Wrightbus plant is currently preparing buses ordered by Abellio which will be the first electric double-decks to be manufactured for London in Northern Ireland.

Wrightbus says the contract for these buses is supporting around 800 jobs linked to skilled manufacturing, and there are plans to further expand the workforce. Highlighting the demand for zero emission vehicles, production at the Wrightbus factory has switched from 30 per cent zero emission buses in 2021 to almost 70 per cent in 2022. Overall production at the factory will be almost double this year compared to last year, driven largely by the desire for zero emission buses.

TfL’s supply chain also supports plants in Leeds (Switch) and Scarborough and Falkirk (ADL), creating jobs, capacity and certainty for the wider national zero emission bus market. TfL says its contracts support tens of thousands of jobs outside London and contribute around £7billion to the UK economy, with 55 pence of every pound spent on London Underground investment going outside of London – indicating how essential sustained funding for TfL is to the wider UK economy.

Buta Atwal, Wrightbus CEO, adds: “We were delighted to welcome Sadiq Khan to our Ballymena factory to see the world-leading StreetDeck Electroliners in production. We’re looking forward to seeing them on the roads of London and helping to improve air quality later this year.

“We design and manufacture our buses in Northern Ireland using parts that are, as much as possible, made and sourced in the UK and we directly employ almost 900 people, with many thousands more supported throughout the UK supply chain. As a result, every new Wrightbus-made zero emission bus for the capital is not just good news for air quality in London, but for jobs across the UK.”

Louise Cheeseman, TfL director of buses, says: “What we are seeing in Ballymena is the green industrial revolution in action. Wrightbus has moved to a bigger factory to accommodate an increased order book and it is great news that the company is now looking to employ more staff with London’s route 111 buses now moving through the production line. This shows the importance of continued investment in decarbonising the transport network and securing the sustainable jobs of the future.”