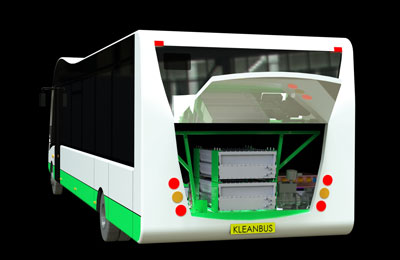 Bus repower company Kleanbus has revealed the first images of its new modular platform technology, which it says can turn any bus, whether single or double-deck, from ICE to fully electric quickly and cost-effectively.

It argues that repowering – removing the diesel engine or hybrid powertrain from an existing bus, replacing it with a fully electric powertrain – is the fastest and most cost-effective method to transition the UK bus fleet to zero emission.

Joe Tighe, co-founder and CEO, Kleanbus, says: “With 97 per cent of UK buses powered by diesel engines that emit large amounts of carbon, oxides of nitrogen, and particulate matter – and a staggering 35,000 of them on the road – the country faces a major challenge to rapidly decarbonise this vital transport sector and is struggling to move quickly enough.

Kleanbus says its e-motors do not have permanent magnets, so use no rare earth materials, demanding less of the planet’s resources and limiting the impact of rare earth metals production.

From its 9,000 sq ft facility in the east of England, the Kleanbus repower programme consists of a full evaluation of the vehicle, removal of its diesel engine and all associated ICE components, scanning and prototyping of the vehicle’s interior, design of a bespoke platform, installation of a new e-drive, build, full testing process and final certification.

Once a bespoke e-drivetrain has been designed and tested it takes less than two weeks to repower an individual bus, according to Kleanbus.

Tighe adds: “The potential for repowered buses is huge. They could bring about fully electric bus fleets six years earlier than relying on roll out of new zero emission buses alone. This could give a potential saving of over 4Mt CO2 and deliver health benefits of improved air quality sooner.”