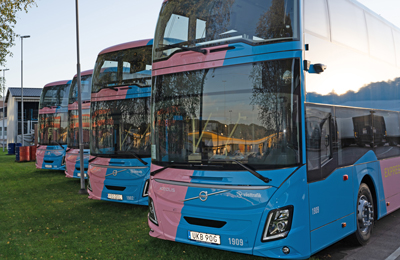 Keolis Sverige, Keolis’ subsidiary in Sweden, started operating the 65km-long commuter route between Gothenburg and Borås as part of a 10.5-year contract awarded in December 2019. The network serves 1.3 million passengers per year, with the existing fleet replaced by 22 new double-deck biodiesel Volvo buses.
The buses, fitted with 75 seats each, have onboard wi-fi and USB sockets, and are 14.36m long and 4.25m high. The route, which runs between central Gothenburg and central Borås, includes a stop at the transport hub in the events district of Korsvägen, home to the Swedish Exhibition and Congress Centre, the Gothia Towers hotel, the Universeum science centre, the Museum of World Culture, the Scandinavium arena, the Liseberg amusement park and the University of Gothenburg.

Keolis Sverige has been present in Sweden since 2003 and operates 1,600 fossil-free buses in four regions of the country, covering 82 million kilometres every year. Keolis has over 4,500 employees in Sweden.