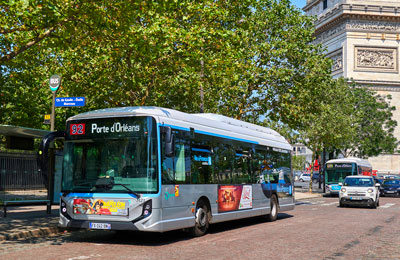 Iveco Bus’ 12m full electric E-WAY has been selected as part of the major European tender for electric buses by RATP and funded by Île-de-France Mobilités, the Paris transport authority. This new tender is part of the implementation of the Bus 2025 plan aimed at making the Paris city bus fleet and its region more environmentally-friendly. The electric buses, marketed in France under the name GX ELEC, will soon join those already in operation on RATP lines.

RATP has elected the overnight charging version of the E-WAY which can be recharged in a few hours in bus depots. The E-WAY bus range is available in four lengths (9.5m, 10.7m, 12m and 18m) and three charging modes: overnight at the depot, via pantograph (ascending or descending) or mixed recharging.

Stéphane Espinasse, Iveco Bus brand leader, says: “We are proud to have been selected again for the largest European tender for electric buses. It is an honour to be able to support RATP in the deployment of its ambitious Bus 2025 plan, which aims to have a fleet of 100 per cent clean buses. The choice of the E-WAY is a confirmation of the expertise of Iveco Bus in the field of zero emission vehicles.”