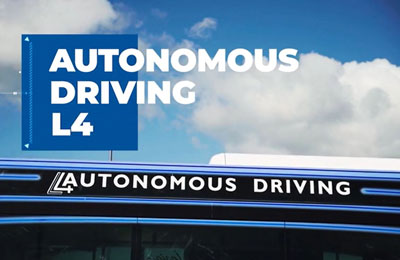 Bus manufacturer Iveco Bus has worked with driverless technology provider EasyMile and other partners to test a fully driverless standard bus prototype, capable of operating under real conditions. The bus has proven feasible for autonomous operations in bus rapid transit (BRT) lanes as well as on private sites.

The scheme’s backers say that this marks a crucial milestone for the progress of autonomous transport in Europe.

The 12m Iveco bus can carry up to 100 passengers, and EasyMile contributes an advanced fleet management solution which it claims is one of the first to be fully dedicated to autonomous vehicles.

The EasyMile and Iveco Bus vehicle has undergone extensive testing and development at the Transpolis proving grounds as well as Iveco and EasyMile’s own test sites.

The autonomous driving system in the vehicle enables it to consistently ‘dock’ within 10cm of the kerb at stations. This is regarded as important in improving accessibility, especially for wheelchairs users. Maximum speeds reached by the bus in autonomous mode demonstrated that the technology also performs well at 40km/h. Vehicle to infrastructure (V2X) capabilities allow the bus to anticipate traffic light phases, meaning smooth stopping and starting as well as lower energy consumption. Manoeuvre and stopping precision also enable automatic parking in the depot.

“We are very proud of this new collaboration with Iveco Bus which comes after our successful joint STAR project started in 2017 and shows the maturity of our technology,” says EasyMile general manager Benoit Perrin. “Autonomous technology brings a series of benefits to bus operations, from additional safety to optimized parking or to improve on board customer services. Together we look forward to offering this new innovative solution to public transport authorities.”

Stéphane Espinasse, Iveco Bus brand president, adds: “As a manufacturer that has a long-standing commitment to the development of driver assistance systems, Iveco Bus is proud of the results of this level 4 autonomous bus project.

“The tests carried out validate, among other things, a speed of 40 km/h. The vehicle’s safety and management features now allow us to plan the next stage, namely, tests under operating conditions.”

EasyMile and Iveco Bus, together with Sector, Transpolis, ISAE-SUPAERO, Université Gustave Eiffel, Inria, and Michelin joined forces to develop the technology to automate the bus in 2017 as part of the STAR, Rapid Autonomous Transport System, project. The collaboration’s aim was to develop the first driverless, autonomous standard bus, capable of operating under conditions similar to real operation, with a prototype ready in 2021.

The project partners are now preparing their next step for the second half of the year – to operate the bus in a city under real conditions.

The development is subsidized by the French government through its FUI (Fonds Unique Interministériel) program.