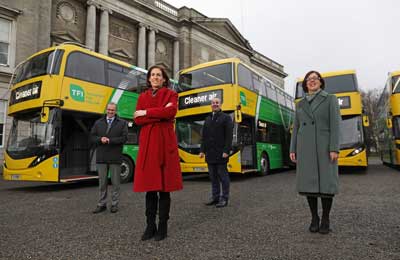 Ireland’s National Transport Authority has unveiled the first of an initial batch of 100 Alexander Dennis Enviro400ER plug-in hybrid buses, with a further 180 on order for delivery in 2021.

The orders form part of a five-year framework agreement for a total of up to 600 Enviro400ER buses that was announced in January 2020.

The double-deck diesel-electric hybrid is capable of at least 2.5km continuous electric range with no exhaust emissions. It utilises the BAE Systems Series-ER hybrid system with a 32kWh lithium-ion battery that can be charged externally via a plug-in connection. The Enviro400ER is recognised as a ‘clean vehicle’ by the European Union’s Clean Vehicles Directive.

In addition to its continuous zero tailpipe emissions range within geofenced areas, the Enviro400ER switches off its diesel engine at low speeds during approach to and departure from stops and when stationary.

“The NTA is committed to the transition to zero and low emission public transport vehicles, and with these new ADL buses, we are taking a significant step towards a more sustainable bus fleet,” says NTA chief executive officer Anne Graham. “These vehicles will also add some badly-needed extra capacity to our city fleets in Dublin and Galway and we look forward to them becoming operational early in the new year.”